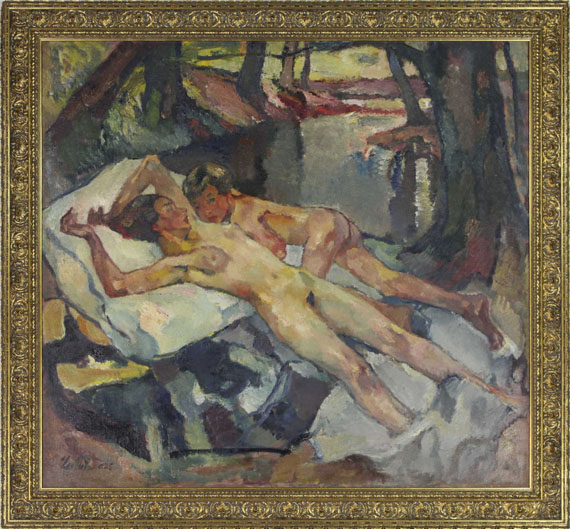 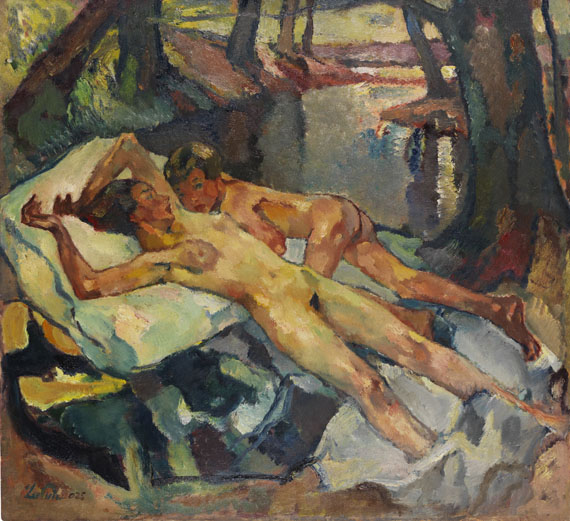 Leo Putz's summer nude scenes from the 1920s are wonderfully light and suffused with light, the impressionist style of the "Scholle" era is enriched by a bright, expressive color palette. Like the color palette, the motifs of his plein-air paintings, executed in the garden and adjacent forestof his new house in Gauting,have become significantly bolder. Putz no longer only shows the female nude moving aboutfreely or standing in the open air, but rather presents itsleeping in an erotic pose and almost defenseless in front of the viewer in "Ein Sommertag“ (A Summer's Day). The subtle erotic tension of the scene is also increased by the fact that the sleeping model is not put to the side of a second female nude, but a naked boy who turns his wakeful gaze towards the viewer in demanding manner. All of this is reminiscent of the subject of "Armor and Psyche", which has been popular since early modern times. However, Putz liberated the traditional erotic depiction in "Ein Sommertag" from its mythological context and transferred it to a modern subject filled with summery lightness and expressive colorfulness. The lying model probably is the young Toni who had posedfor the successful painter on several occasionsin Gauting theprevioussummer; and Helmut, the then nine-year-old son of the artist, was portrayed several times with the tender, dark-haired beauty. Our "Ein Sommertag" was preceded by the works "Toni und Helmut" (Putz 833 and Putz 835) and "Im Schatten" (Putz 834) in 1924. The later version of "Toni und Helmut" anticipatedthe poses of the two nudes stretched out on awhite pillow in a small format, but in our final version Putz has broadened the view and virtuously expanded the background of the large format through the truncatedtrees, the reflections on the water surface and the high horizon bathed in a rosé and yellow evening light. "Ein Sommertag" wonderfully combines everything that makes for the special appeal of Putz's masterful plein-air painting. [JS]
More Information
+
Sell
Get a free appraisal for a similar object!
+
Register for
Leo Putz
+
Buying from A-Z
+
Contact a specialist
+
Leo Putz Biography
Share