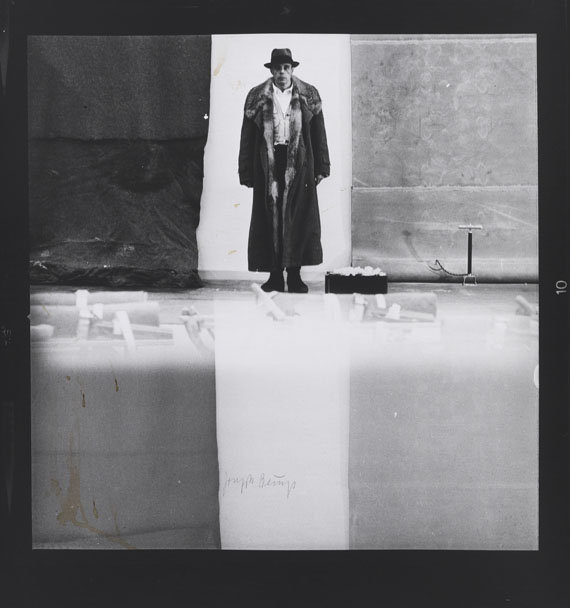 On the occasion of the set-up of the exhibition "Joseph Beuys. Teckningar och objekt. 1937-1970. Ur samlimg van der Grinten" at Moderna Museet in Stockholm (January 16 to February 18, 1971), Joseph Beuys was accompanied by his friend Lothar Wolleh who photo-documented the set-up. Wolleh presented these "Stockholm photos" in his 1971 artist book "Beuys. Eine Dokumentation von Lothar Wolleh" . The photos also led to a joint initiative, the publication of the so-called underwater book, consisting of 51 Wolleh photos printed on PVC and a Beuys multiple. The project was never completed due to technical problems, even if a few copies of the book exist, but Wolleh's photographs on PVC were given a “second life” as “3 Tonnen Edition“ (1973) - in reference to the total weight of the sheets intended for binding as an underwater book – especially since Beuys had some of them "revised", signed and stamped. Under the same title “Unterwasserbuch“ (1972), Joseph Beuys also designed a composite work in a small edition, consisting of Lothar Wolleh's book made of PVC and a diving torch in a basin with water." (Quote from: https://www.lothar-wolleh.com/de/stories/joseph-beuys-in-den-archiven-lothar-wollehs/). In our iconic photo, Beuys stands between the tracks of "Elastischer Fuß" from 1969, with the sledges from "The Pack", also from 1969, in the foreground. During the set-up Beuys wore a fur coat, which has to be understood as a homage to the north and its myths. The man in fur enters the room as a shaman who seems to arrange his works (instruments) for a séance. [Eugen Blume / EH]
More Information
+
Sell
Get a free appraisal for a similar object!
+
Register for
Joseph Beuys
+
Buying from A-Z
+
Contact a specialist
+
Joseph Beuys Biography
Share