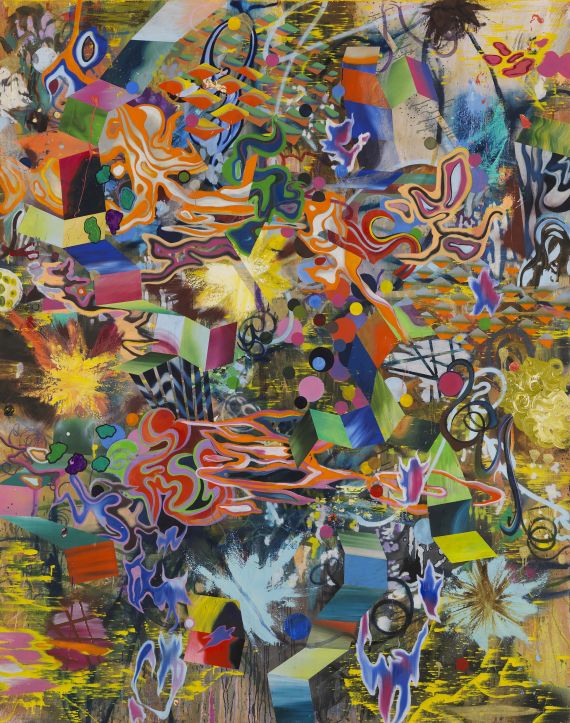 enlarge image
+
230
Daniel Richter
Fühlung, Flirrung, Flüchtung, 1999.
Oil on canvas
Estimate:
€ 180,000 / $ 210,600
Sold:
€ 225,000 / $ 263.250
(incl. 25% surcharge)
Lot description
Fühlung, Flirrung, Flüchtung. 1999.
Oil on canvas.
Verso of the canvas signed, dated and titled. 215 x 170 cm (84.6 x 66.9 in).
Verso with several sketches by the artist.
• Large-size work from Richter's abstract period of creation through which he became one of Germany's leading contemporary artists in the 1990s.
• Gripping explosion of colors and forms.
• Daniel Richter realizes an "absolute abundance of color and painting" (Roberto Ohrt).
• The artust creates a symbiosis of coincidence and planning, of surface and detail, of abstraction and association, of kitsch and beauty.

Essay
Hello Daniel, we love you
Daniel Richter can look back onto an impressive list of solo exhibitions, including shows at the K 21 in Düsseldorf, the Neue Berliner Kunstverein, the Kunstmuseum Basel, the Kunsthalle Hamburg and the Kestner Gesellschaft in Hanover. He is considered one of the most successful contemporary painters (SZ Magazin) and ten years ago the art world saw a real "Daniel Richter boom". But over the last few couple of years new chapters have been added to this success story, as the artist's works now featured in numerous large-scale exhibitions. In 2015 the Schirn Kunsthalle in Frankfurt dedicated the solo exhibition "Hello, I Love You" to him. In 2016 and 2017 his works were part of the comprehensive retrospective "Lonely Old Slogans" in the Louisiana Museum in Humlebæk, Denmark, which was also shown at Vienna's 21er Haus (now Belvedere 21) and at the Camden Arts Center in London. Today Daniel Richter's works are part of numerous renowned public collections worldwide, including the Kunsthalle Hamburg, the Städel Museum in Frankfurt, the Center Pompidou in Paris or the Museum of Modern Art in New York.
"An abundance of color and painting"
Daniel Richter's oeuvre is evidence of complexity, constant change, development and ambivalence. Like the large-format work offered here, his works fluctuate between surface and detail, strict composition and coincidence, between objectivity and abstraction, beauty and iconic kitsch. Like his teachers Werner Büttner and Albert Oehlen, Daniel Richter initially devoted himself to abstract painting, but while his artist colleagues question the painterly gesture and the aura of the painted picture itself with plane and thick layers of paint and coarse overpainting, Daniel Richter creates his seemingly psychedelic pictures from color-intensive, small-scale forms, carefully laid out grid structures, geometric patterns, line compositions, ornamentally entwined figurations and dripped paint splatters. The art historian Roberto Ohrt describes Richter's works of the 1990s very aptly as "the maximum abundance of color and painting", because they are bursting with a boundless lust for variety of shapes and an apparently unlimited color palette and span a fascinating range of apparently random and almost meticulously planned compositions. "Richter's abstract pictures made since 1995 are characterized by an at times almost berserk-like alternation between the carefully planned ornament and the accidental gesture, the carefully planned and painted seems to be in a constant battle with what is wiped, dripped and spilled." (Christoph Heinrich, director of the Denver Art Museum, in: Exhibition cat. Daniel Richter. Die Palette, 1995-2007, p. 9)
Abstraction, figuration and the organization of color on a surface
Around the turn of the millennium a radical change took place in his work, which led him to a second period with initially figurative illustrations with narrative undertones, before another change took place in his work just a few years ago, a reorientation with which he moved away from narration and figuration as far as possible, turning a more plane and schematic painting. "Ultimately, there is no difference between abstract and figurative painting," the artist explains, "the problems of organizing color on a surface always remain the same." (Ibid., p. 10) This is how Richter structures the painterly spectacle offered here, which at first appears chaotic, with, among others, with the help of a very characteristic linear meshwork, contour lines and interwoven colors, which help to hold the playful, small-scale work - similar to the ribs and bones of a body - together as a whole. The image structure of these abstract works has therefore already been compared with mosaic or cloisonné techniques, in which individual small fragments of color and shape are also put together and connected to an overall composition, a work of art. Daniel Richter also makes use of certain techniques from graffiti art: Outlines, with which individual letters are divided, and the mostly white inlines, with which plasticity and light reflections are created in street art, are also found in the exuberant painting explosions of the 1990s, among which the work offered here can stand its ground as a particularly representative and successful example. [CH]
More Information
+
Sell
Would you like to sell a similar object?
+
Register for
Daniel Richter
+
Buying from A-Z
+
Contact a specialist
+
Daniel Richter Biography
Share 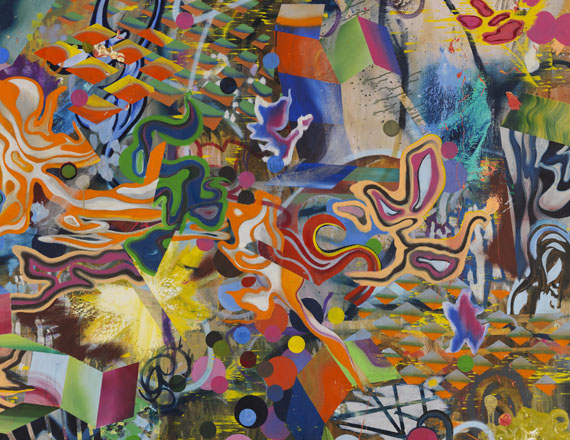 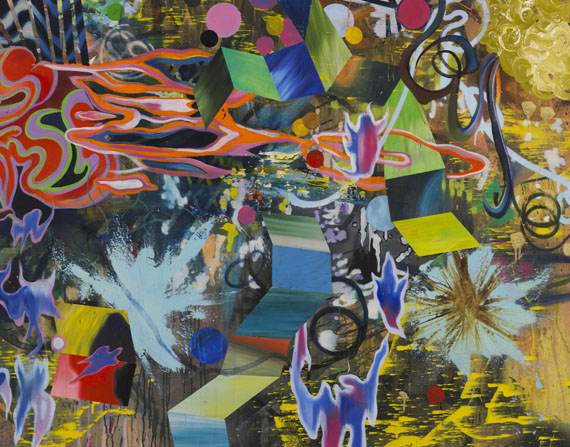 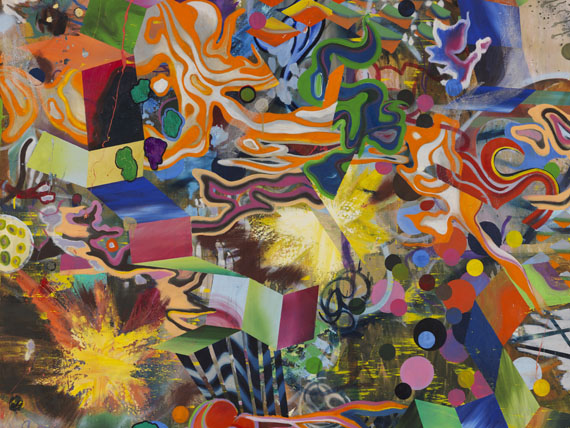 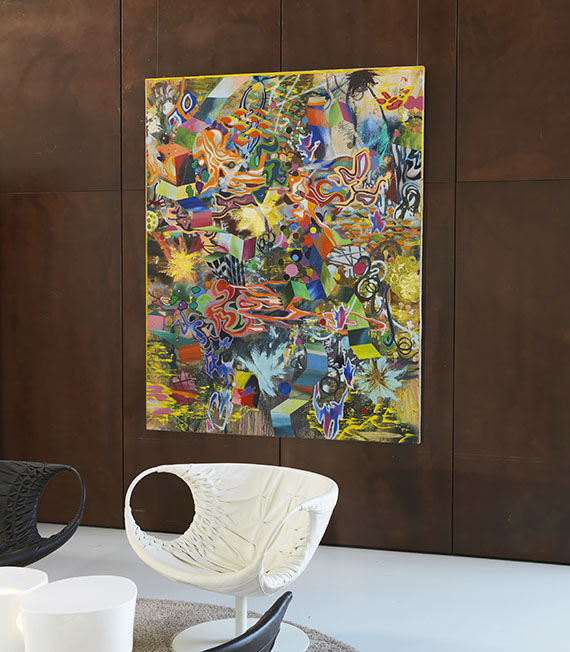