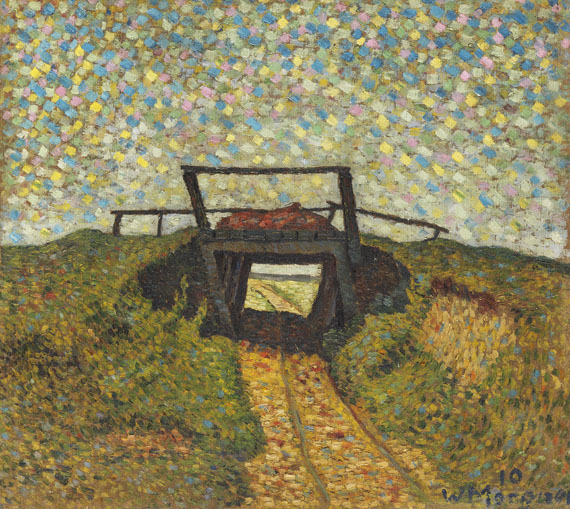 • Paintings by Wilhelm Morgner are extremely rare on the international auction market.
• This landscape from 1910 is an early masterpiece of museum quality from the small oeuvre of the artist who fell in WWI in 1917.
• The National Socialists posthumously defamed Morgner's painting as "degenerate".

We are grateful to Mr Walter Weihs, Wilhelm-Morgner-Archive, Soest, for his kind expert advice. The work is listed in the new and to date unpublished catalog raisonné of Wilhelm Morgner's paintings with the number "WV Weihs/Tappert 55".

Essay
Wilhelm Morgner, born in Soest in 1881, began his artistic training at the private art school of Georg Tappert, the Berlin expressionist in Worpswede, in October 1908; it lasted until the end of January 1909. In 1910 Morgner was Tappert's student again, this time in Berlin. “My work is corrected by Tappert [..] Let me tell you, I'll move back to Soest at the very first opportunity. I work hard in Soest. That is why I developed my personal style and simplified everything in my own way using light and shadow, so that Tappert cannot understand how I could achieve something like that, ”Morgner wrote to his childhood friend Wilhelm Wulff, who was back in Soest, on April 20, 1910. Jürgen Wißmann, Das malerische Werk von Wilhelm Morgner, in: Wilhelm Morgner, Münster 1991, p. 22) In Berlin Morgner was in contact with the latest art movements, not least with the help of Tappert, which led to participation in exhibitions that also consolidated his artistic position in Soest, from June on Morgner was back in Soest.
Morgner worked extremely hard: he drew a lot and transferred the motifs into pictures, making portraits of Soest women, men and children, some show people at work, while others show the local landscape like this one with a small bridge that he had sketched in a pen drawing one year prior: An old man with a cane crosses over the ditch and focuses his gaze into the background showing a woman working on the field. A year later the scene was transferred into a painting without figures. This picture is not only strictly ordered in terms of perspective and the effective way the colors are applied – thin and thick layer of paint alternate. Morgner's color scheme tends to be yellow-brown, but also green, red and, as it is particularly striking in the sky in this work, a pink alternating with a delicate blue and lemon yellow which contributes to the liveliness of the narrow landscape detail. Morgner‘s soft light shapes the three-dimensional swell over which an old, crooked bridge leads like a tunnel-gate into another 'country'. The “Landschaften mit kleiner Brücke” from 1910 predominantly feature this motif, as well as the pronounced color scheme. They would be inconceivable without their important model, the “Langlois Bridge” in Arles. Of course, Morgner could not find a comparably picturesque bridge anywhere around Soest. And van Gogh, for his part, also used a motif he had discovered in a Japanese woodcut. Van Gogh also studied landscape paintings with rural scenes by Jean-François Millet, which also echo in Morgner‘s particularly skillful light modulation of this landscape offered here: the soft sfumato in the transitions of the at times hard dabs of the brush in pointillist style. Morgner was well informed about van Gogh and Millet; he was in possession of Julius Meier-Graefes' monograph published in 1910. And Morgner most certainly visited the Sonderbund exhibition in Düsseldorf in 1910, where latest artistic positions from France were shown from June to October, and he also kept an eye on the collection of the Folkwang Museum in Hagen. “I will be going to Hagen in the near future,” Morgner confirmed on September 28, 1910 to his friend Wilhelm Wulff. (Hans Wille, Briefe und Postkarten von Wilhelm Morgner an Wilhelm Wulff, in: Wilhelm Morgner, Münster 1991, p. 65). Morgner discovered a wide range of modernist positions at the still young Museum Folkwang, which the museum‘s founder Karl Ernst Osthaus had compiled since 1901. The collection comprised pictures and drawings by the masters of Post-Impressionism: Vincent van Gogh and Paul Gauguin, as well as works by the then current pointillists such as Georges Seurat , Paul Signac and Edmund Gross. Van Gogh's role as idol not only echoes in the titles Morgner uses, such as “Brücke” or “Kartoffelernte” (Potato Harvest) also made in 1910, but also in pictorial citations like the “Ährenleserin“, a stooped down figure of a peasant woman which Morgner must have discovered upon his visit to the museum in Hagen. With “Landschaft mit kleiner Brücke (bei Soest)“ from 1910 Morgner created an early masterpiece.
At that point he had already surpassed his teacher Georg Tappert. However, Morgner got in contact with Herwarth Walden's 'Sturm' gallery in Berlin through Tappert, which led to the contact with the group of artists of the “Blauer Reiter“ around Wassily Kandinsky and Franz Marc, who, in return, invited him to participate in the second exhibition of the Blaue Reiter at the Munich bookstore Goltz. The far-reaching inspiration he received from the Sonderbund exhibition in Cologne in 1912, where he exhibited a painting, and his subsequent recognition and early success with participation in exhibitions in the German art scene was suddenly interrupted by the outbreak of the First World War; drafted at the beginning of the war, Wilhelm Morgner fell in Langenmarck in the province of Flanders in August 1917. In 1920, Alfred Flechtheim commemorated the early deceased artist in an extensive exhibition in Düsseldorf. The accompanying catalog lists 50 painting, number 8 is titled “Die Brücke” and may well have been our „Landschaft mit kleiner Brücke (bei Soest)“ from 1910. [MvL]
More Information
+
Sell
Would you like to sell a similar object?
+
Register for
Wilhelm Morgner
+
Bidding Options
+
Bid by telephon / written
+
Buying from A-Z
+
Catalogue Order
+
Contact a specialist
+
Wilhelm Morgner Biography
Share 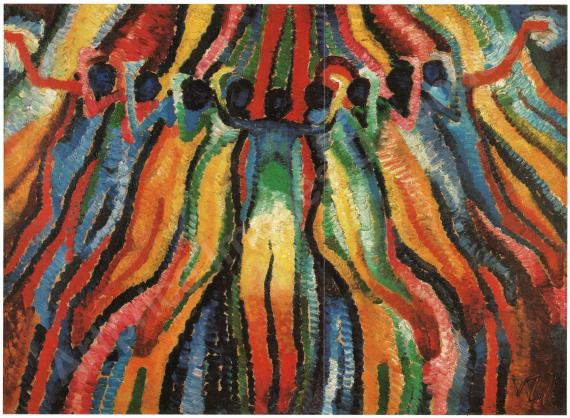 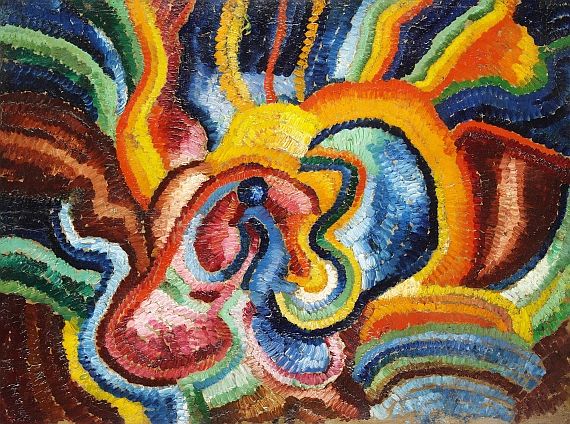 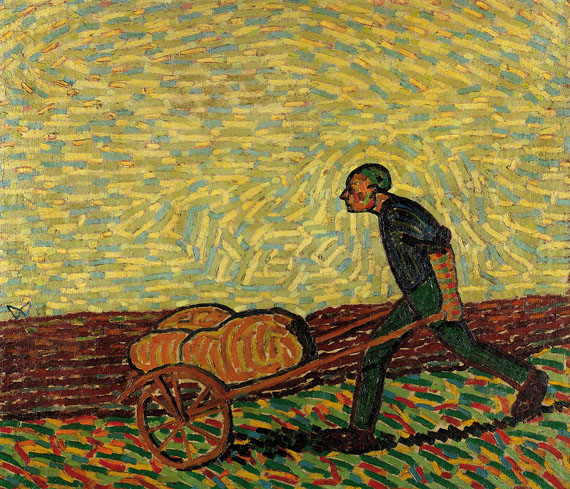 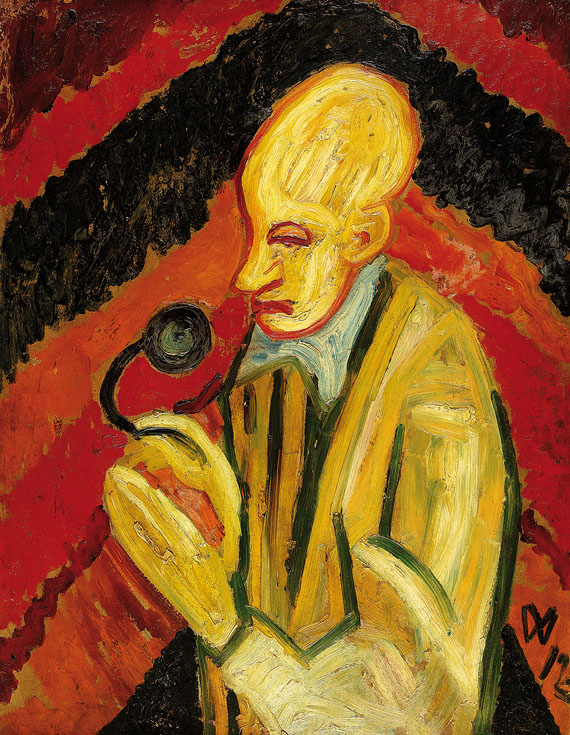 WILHELM MORGNER
Mann mit blauer..., 1912
Sold: € 114,000
You might also be interested in
+
and all other offers
Buyer's premium, taxation and resale right apportionment for Wilhelm Morgner "Landschaft mit kleiner Brücke bei Soest"
This lot can be purchased subject to differential or regular taxation.