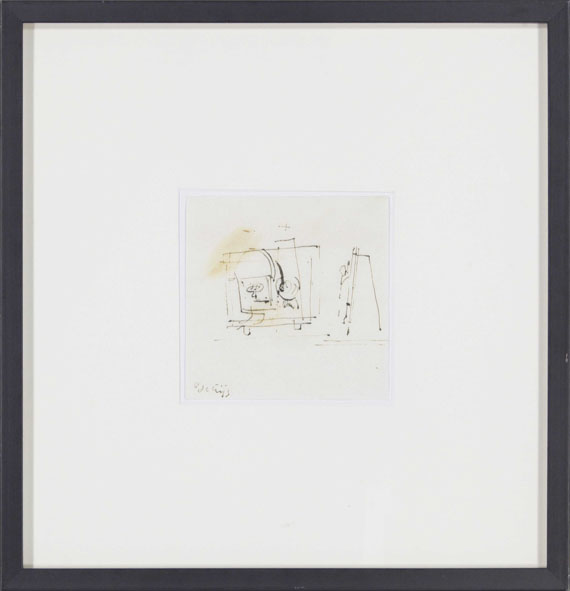 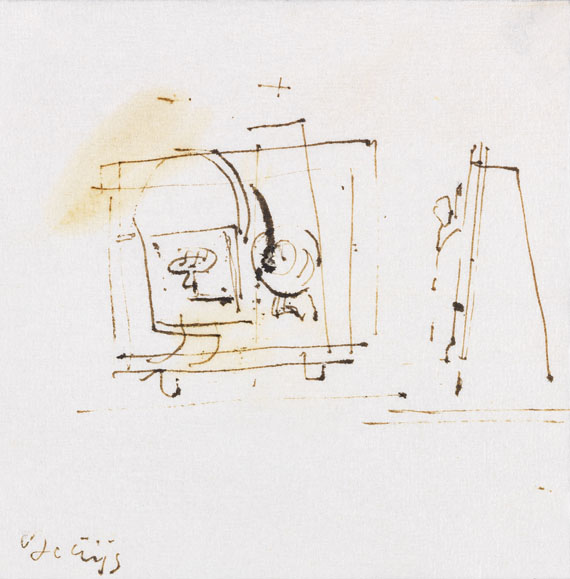 • Made as explanatory drawing in a talk with Egon Kalinowski about the bronze "Så FG-Så UG", 1953 (today at Beuys Block, Hessisches Landesmuseum Darmstadt, formerly Collection Ströher).
• Contemporary document of the friendship of two artists.

Documenta III in 1964 was the first to include works by Joseph Beuys. He was supposed to exhibit three drawings, but he also brought the sculptural works "Bienekönigin" I, II and III, as well as another, larger sculpture. It was "Så FG-Så UG". This large bronze and iron sculpture was created in 1952, but it was not shown before the documenta in Kassel some 12 years later. Today the work is part of the famous "Beuys Block" at the Hessisches Landesmuseum, Darmstadt. In the following years Joseph Beuys used the works shown at documenta III to explain his theory of the "social sculpture", which he developed in the 1950s, on various occasions. According to the theory, the sculpture brings order to chaos. To Beuys a sculpture is made up of various forces, which can be described with terms such as chaos and order, will, feeling, thought, ratio, movement or emotion. A plastic is formed from all the states formulated in these terms; and these terms also form and influence people who, for example, deal with the sculpture as a viewer. As part of society, people also have an impact on society if they are ready to open up to the sculpture and the concept behind it. Beuys denominates this theory "Social Sculpture ". In contrast to the conventional conception of art, it is not primarily the aesthetic effect that defines the beauty of a sculpture, but the sculpture gains its aesthetics only through the expansion of human consciousness. In 1973 Joseph Beuys met Ernst Kalinowski. The sculptor, born in 1924, attended the Düsseldorf Art Academy at the same time as Beuys. Exactly where this meeting took place is not known, but the drawing on a paper napkin from the estate of Kalinowski (died 2013) on which Beuys sketched his sculpture "Så FG-Så UG" is a document of their meeting. [EH]
More Information
+
Sell
Get a free appraisal for a similar object!
+
Register for
Joseph Beuys
+
Buying from A-Z
+
Contact a specialist
+
Joseph Beuys Biography
Share