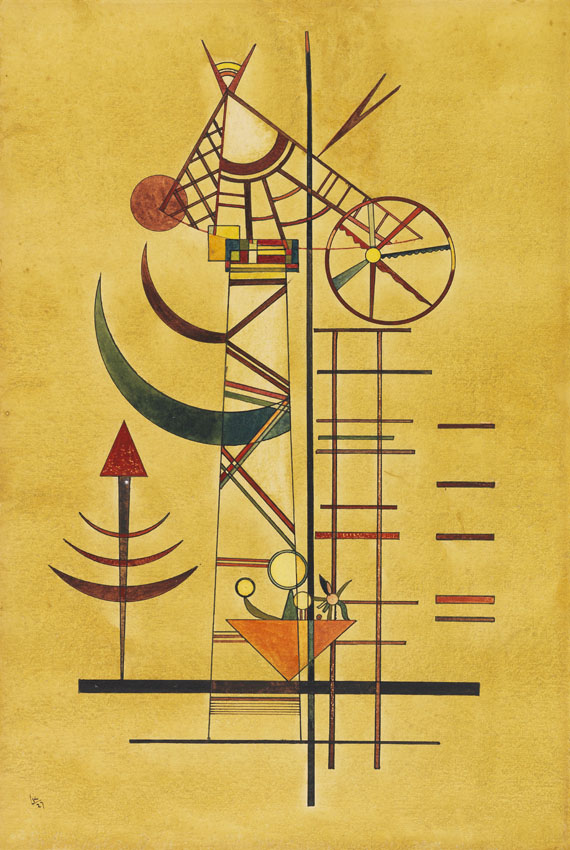 enlarge image
+
376
Wassily Kandinsky
Gebogene Spitzen, 1927.
Watercolor on paper, originally mounted on back...
Estimate:
€ 250,000 / $ 300,000
Sold:
€ 1,125,000 / $ 1.350.000
(incl. 25% surcharge)
Lot description
Gebogene Spitzen. 1927.
Watercolor on paper, originally mounted on backing board.
Barnett 807 (there with the illu. of the pencil sketch from the artist's handlist and inscribed "Location: unknown"). Lower left monogrammed and dated. With date, title, number "240" on the reverse. 48.4 x 32 cm (19 x 12.5 in).
Mentioned in the artist's handlist under the watercolors for November 1927: "xi 1927, 240, Gebogene Spitzen".
• Spectacular rediscovery from the estate of a German private collection.
• Kandinsky research did not know of the whereabouts of "Gebogene Spitzen" for more than 70 years.
• The strictly geometric compositions from the Bauhaus yeasr are the artist's most sought-after works on paper on the international auction market.
• With its balanced construction between motion and resting stability, it is a prime example of the theory that Kandinsky conceived in "Punkt und Linie zu Fläche" (Point and Line to Plane, 1926).

We are grateful to Mrs Vivian Endicott Barnett, New York, for her kind expert advice.

PROVENANCE: In the artist's possession (until 1944).
Nina Kandinsky, Paris (1944-1949).
Rudolf Probst, Mannheim (at least since 1944 on consignment from the ownership / estate of the artist, until 1949).
Private collection North Rhine-Westphalia.

Essay
The precondition
Wassily Kandinsky increasingly changed his expressive pre-war style towards the end of the years in Russia (late 1914 to late 1921) and devoted himself to Russian Constructivism. His forms now became more geometric, his palette lighter. In the meantime he had begun to teach at the Bauhaus in Weimar, and describes this new artistic direction as 'cool abstraction' and published an article about it in Cicerone in 1925. The formal elements of 'cool abstraction' include bundles of lines and chessboard structures, circles and triangles, which are sometimes tapered to the shape of an arrow. Forms float freely in space, cross and penetrate one another or are grouped around an imaginary center. This results in highly complex compositions with a multitude of shapes and colors, references and overlaps as well as color changes. Outlines are tamed and colors clarified. Kandinsky develops a characteristic geometry in form of lines, triangles, squares, circles and signs, blurred edges are replaced by sharp contours. Instead of symbolic colors, which Kandinsky still called for in his publication 'About the Spiritual in Art", published by Pieper in Munich in 1912, we now find clarified structures, which Kandinsky outlines in the series of Bauhaus books published by Albert Langen in 1926: 'Point and Line to Plane. ”This is the description of separate, objective formal elements that must be harmoniously and formally coordinated with one another, no longer abstracting the world of nature, but creating an independent three-dimensional meaning. This change takes place, however, on a spiritualized level, an essentially nonrepresentational level that conveys a view of the world through formal analogies, and yet is not free from associations with objects - as here at the foot of the towering construction, like a lighthouse-like landmark, a boat with people passing by, a pictorial element, which frequently occurs in Kandinsky's expressive imagery, appearing constructed quotation.

A balanced composition
With its balanced construction between movement and static stability, 'Gebogene Spitzen' (Curved Tips) appears as a possible example of his educational teaching, in which Kandinsky probed the basis of his painting and examined the relationships between the forms, lines and planes, while certain basic colors correspond to certain basic forms. The color yellow is assigned to the triangle, the color red to the square and the color blue to the circle. “The ultimate consequence of this process is the complete elimination of the representational sound, whereas the purely painterly elements remain completely undisturbed, meaning they can develop their inner effects”, says Kandinsky in his article 'Abstrakte Kunst' (in: Der Cicerone, issue 17, 1925, pp. 638-647, here from p. 643). Kandinsky thus proclaims a strict separation of art and nature and assumes that “as long as we paint by putting the painterly elements on the framework of natural forms, it will be impossible to avoid the secondary sound and thus we won’t discover the pure law of painterly construction. [..] The consistent handling of the basic elements with the examination and application of their inner forces, thus generally the inner point of view, is the first and most inevitable condition of abstract art" (p. 647). In this work the artist supports the delicately composed pictorial elements and form inventions with a strong yellow background and with a distinctive coloring that deepens the imaginary space into which the weightlessly floating linear construction expands.

The provenance
The story of the composition 'Gebogene Spitzen' is unusual and at the same time fascinating. Fascinating because its whereabouts had been unknown since 1949, and it was only rediscovered in context of this auction. But first things first: After the Bauhaus in Berlin had been closed by the National Socialists in July 1933, Kandinsky and his wife Nina moved to Paris in December that year. This watercolor was probably part of their luggage, as the customs stamp on the reverse suggests. Kandinsky gave the watercolor to the art dealer Rudolf Probst on consignment, as a note in the artist's handlist delivers proof of; after his death in 1944 his wife Nina Kandinsky managed the estate. Nina Kandinsky’s final entry in the handlist regarding the watercolor reads: "xi 1927, 240, Gebogene Spitzen" "vendu par Probst" (sold through Probst). The Kandinsky Foundation is also in possession of a list of the works that Kandinsky had at Probst in Mannheim in 1949, and in which Nina Kandinsky’s "Gebogene Spitzen" is crossed out and marked sold. It can therefore be assumed that the sale through Probst took place in 1949. After that the whereabouts of the outstanding watercolor remained unknown to Kandinsky experts and researchers for more than 70 years. In Vivian Endicott Barnett's catalog raisonné, "Gebogen Spitzen" is therefore only listed with the tiny sketch from Kandinsky's handlist and "Location: Unknown". Accordingly, this extremely pleasant rediscovery of the watercolor "Gebogene Spitzen" in the estate of a private collection in the Rhineland may well be considered an art-historical sensation. [MvL/JS]
More Information
+
Sell
Would you like to sell a similar object?
+
Register for
Wassily Kandinsky
+
Buying from A-Z
+
Contact a specialist
+
Wassily Kandinsky Biography
Share 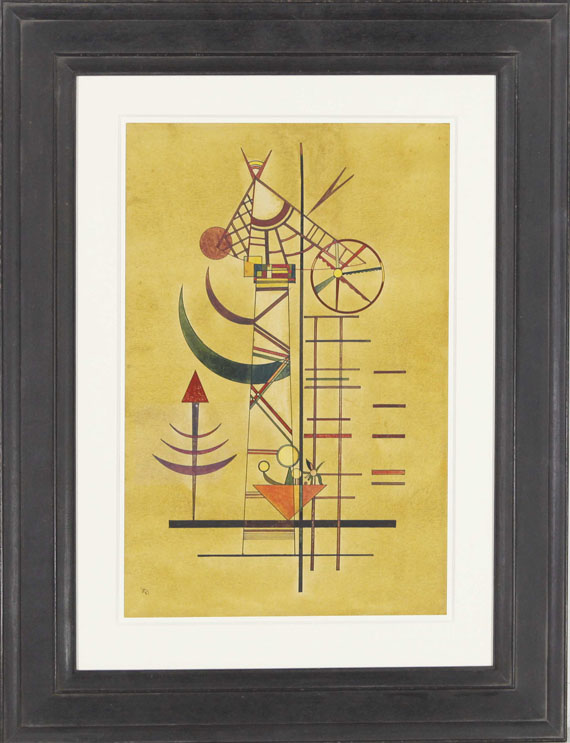