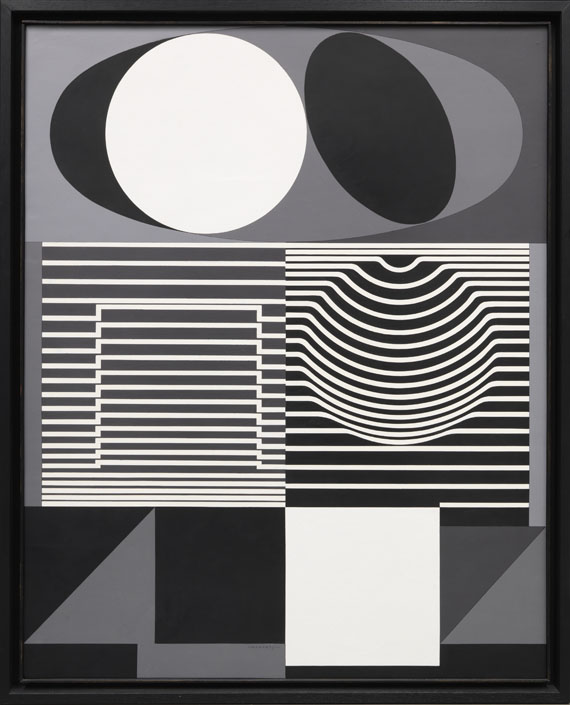 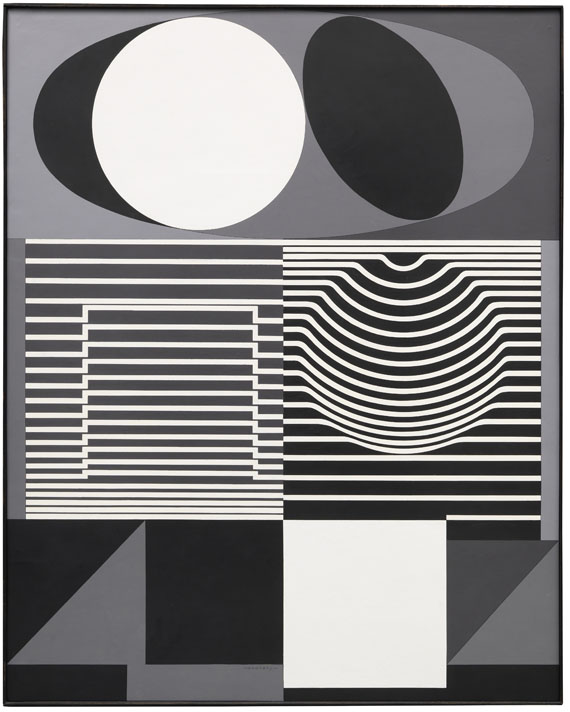 • A mirror-inverted version of "ONDHO" (1956–60) is in the Museum of Modern Art, New York.
• "ONDHO" unites Vasarely's fundamental design elements.
• Vasarely's works provided the basis for today's digital visualization as early as in the mid 20th century.
• His visionary oeuvre was honored in four documenta participations in 1955, 1959, 1964 and 1968.

We are grateful to Mr Pierre Vasarely, sole heir and owner of Victor Vasarely's copyright, for the kind oral confirmation of this work's authenticity. The work will be included into the forthcoming catalog raisonné of the Fondation Vasarely, Aix-en-Provence.

PROVENANCE: Collection Louis Bogaerts, Brussels (with a label on the reverse) (acquired directly from the artist)
Private collection France (since 1985).

"The 'abstract' only revealed itself to me truly in 1947 – when I realized that the pure form-color can interpret the world."
(Victor Vasarely, quoted from: Richard W. Gassen, Vasarely. Erfinder der Op-Art, Bottrop 1998, p. 61)

Victor Vasarely‘s longtime activity as commercial artist surely had a strong impact on his composition: His pictorial creations are deeply rooted in Gestalt theory and Gestalt psychology. However, individual, personal experiences also shaped his form finding. Accordingly, Vasarely gave certain work phases titles that reference personal experience: "Belle-Isle", "Denfert" and "Gordes-cristal". Ellipse and oval played an essential role in the "Belle-Isle" phase, which the artist himself called it. As source of inspiration he mentioned pebbles on a beach or the setting sun, as he experienced it on the Breton island of Belle-Isle. Three-dimensional structures emerged in his mind's eye inspired by subtle cracks in the tiles of the metro station Denfert near his place of residence, which would lead him to the effects made up of lines that characterize his ‘Photographisms‘. Vasarely analyzed these optical impressions and visions, systematized them and integrated them into his art. This is how his innovative and at the same time very touching work came into being. In "ONDHO" these basic elements are united.
At the beginning of the 1950s, Victor Vasarely concentrated was so occupied with formal aspects, that reducing the palette to black and white seemed inevitable. With the exclusion of other colors, Vasarely was examined the fundamental questions he was concerned with during this time. In our painting from 1960, which is based on a conception from 1959, he even goes a step further by integrated various shades of gray into the composition. At the top, round and oval shapes are juxtaposed and connected by an ellipse. They can be perceived both as spatial depth or flat. A square, a triangle and an rectangle are lined up in the very bottom, also allowing for a two-dimensional perception or a spatial one. The central image field is dominated by linear kinetics which, through optical effects, form sphere and cube, that is rectangle and circle, supposedly into the third dimension. "ONDHO" combines exactly those elements that Vasarely has approached with great consistency since the mid-1940s. In a mirror-inverted variant, in which the light and dark values are mirrored, the artist examines the contrasting image effect. This counterpart is in the Museum of Modern Art in New York. [EH]
More Information
+
Sell
Get a free appraisal for a similar object!
+
Register for
Victor Vasarely
+
Buying from A-Z
+
Contact a specialist
+
Victor Vasarely Biography
Share