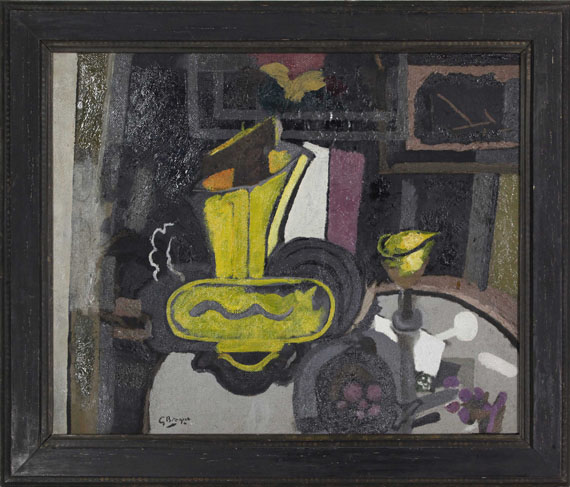 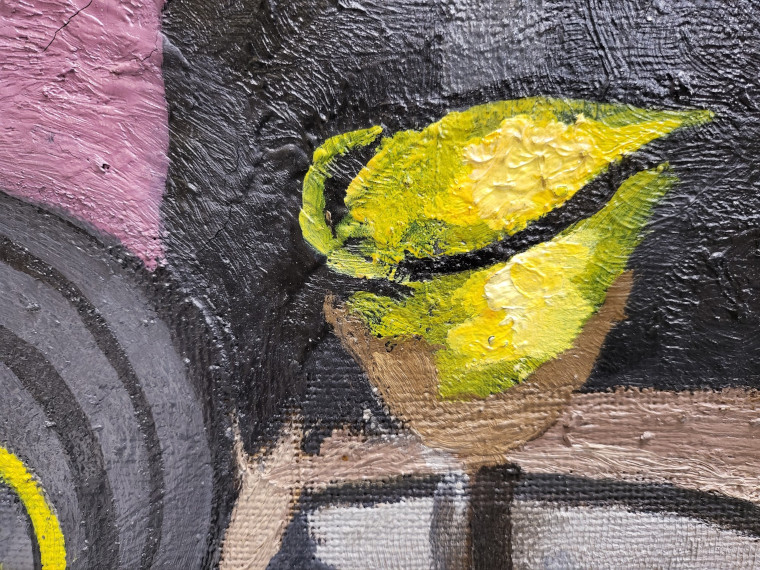 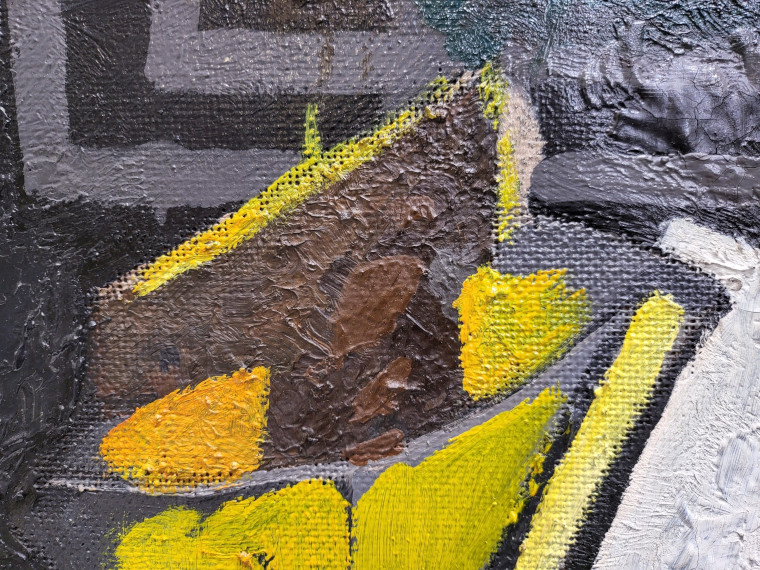 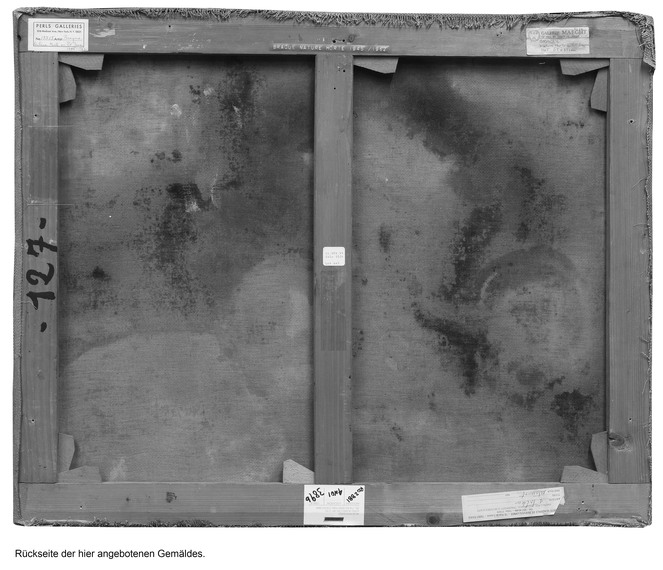 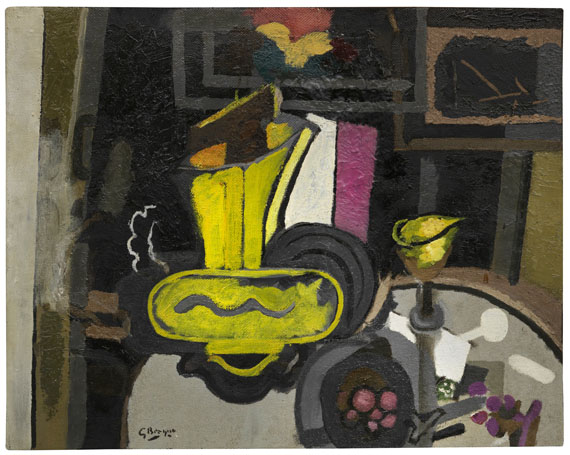 • A photo taken in the artist's studio shows the back of the work.
• Braque visualizes his very personal abstract view of his studio in Varengeville.
• The choice of colors, the unusual perspective and the carafe ennobled as dazzling main motif make this picture a work of utmost modernity.
• Colorful luminosity and pastose obscurity arrange this still life's image spaces.
• Still lifes play a predominant role in the artist's oeuvre. They helped Braque to attain his inimitable style.

PROVENANCE: Galerie Maeght, Paris (directly from the artist between 1962 and 1966).
Perls Galleries, New York (acquired from the above in 1968, with the partly hand-inscribed gallery label on the reverse).
Private collection Europe (acquired in 1999, Christie's, November 10, 1999, lot no. 643).

LITERATURE: Christie's, New York, 9226th auction, 20th Century Art (Day Sale), November 10, 1999, lot no. 643 (with color illu., with the label on the reverse).
"Without having striven for it, I do in fact end by changing the meaning of objects and giving them a pictorial significance which is adequate to their new life. When I paint a vase, it is not with the intention of painting a utensil capable of holding water. It is for quite another reason. Objects are recreated for a new purpose: in this case, that of playing a part in a picture. Once an object has been integrated into a picture, it accepts a new density and at the same time becomes universal."
Georges Braque, quoted from: Douglas Cooper, Braque. The Great Years, Chicago 1972, p. 111.

The still life as the linchpin in the oeuvre of Georges Braques
The traditional subject of the still life already played a particularly important role in Georges Braque's earlier Cubist and Fauvist paintings, and remained particularly characteristic of him, finding a variety of expressions throughout various developmental stages and creative phases all the up to his late work of the 1940s and 1950s.
For Braque, the still life opened up an opportunity for a permanent, ubiquitous occupation with human perception of space and perspective, as well as with the representation of private everyday objects and furniture placed in his studio, which can be found in many his still lifes. Braque was not concerned with a realistic account of the objects, but rather with the spatial anchoring and the formal relationship of things to one another, as well as his own view of the objects that surrounded him every day. The artist even went a little further, claiming that things only exist in their relationship to one another: "For me, things exist only in so far as there is a relationship between them or between them and me. When you attain this harmony, you reach a kind of intellectual non-existence - which I can only describe as a state of peace that makes everything possible and right. Life then becomes an everlasting revelation. That is true poetry. " (Quoted from: John Richardson, Georges Braque, London 1959, p. 27). Braque's still lifes thus exceed a certain limitation: They do not show any real space, but basically a state of mind.
In 1962 Braque said in retrospect: "These interior paintings represented a tremendous immersion in myself. [.] As I painted them I was gripped by a kind of jubilation. [.] The objects faded away, leaving me the imprint, the echo of their poetic relationships. They no longer existed. My work was enlightened and it enlightened me. Everything became simple and full of meaning." (Georges Braque in a letter to André Verdet in 1962, quoted from: Golding/Bowness/Monod-Fontaine, London 1997, p. 74).

Color, form and space: a masterpiece from the artist's impressive late creative period
The work "Nature morte au pot jaune" offered here, which Braque completed between 1945 and 1962, presents itself to the observer as an striking example of his more mature, impressive late work from the time of World War II and after. When the German Wehrmacht began to occupy parts of France in 1940, Braque was still living in Varengeville in Normandy. In the uncertain and eventful period that followed, the artist first moved to the vicinity of Limoges and later to the Pyrenees, before he retreated to a small studio in Paris. He returned to Normandy only after the Allies had liberated France in 1944. Although Braque celebrated first major successes as early as in the 1930s, it was only in these years, from around 1940 onward, that his impressive work was appropriately appreciated and internationally recognized. In 1962 he was the first living artist honored with a grand retrospective exhibition at the Louvre in Paris,. At that time he was finally acknowledged as one of the most important French painters. Today his works are in all of the important international collections, among them the Museum of Modern Art and the Metropolitan Museum of Art, New York, as well as both the Louvre and the Center Pompidou, Paris.
Georges Braque's work underwent a revision as early as in the late 1920s . He stopped making nature-oriented depictions and began to put focus on the formal pictorial structure of his compositions instead, which – like the work offered here – often gain a certain spatial depth, an expansion of the still life‘s the pictorial space to a third dimension, giving more room to the objects represented, like it is the case with dominant, unusually shaped vessel here.
The round table protrudes a little into the background, which Braque decorated and structured with several framed pictures that he reduced to geometric squares. The strong black, which Braque already used in earlier still lifes of the 1920s, emphasizes the depth of the multi-layered composition, as does the particularly high-contrast, diverging color palette, which separates fore- and background in bright colors and restrained gray-brown-green modulations.
The artist's color palette also changed during these years, overcoming the previously so characteristic dark, earthy and gray-black tonalities to a certain extent, making room for more luminous, clear and strong colors. The bold, expressive and at times impasto colors of our work testify to this duality of the restrained nuances in gray, black, brown and ocher that are so typical of Braque, as well as the luminosity of the lemon yellow used here, which shimmers into lime green, and at times rosy, sometimes darker purple.

Captured for eternity: "Nature morte au pot jaune" and Georges Braque in the studio
After the work offered here had been completed, the then very successful American photographer Sanford Roth (1906–1962) took several shots of it with the front facing the wall next to Georges Braque in the studio. Roth immigrated from the United States to France in the late 1940s and made a name for himself over the following years with photographic portraits of, among others, Pablo Picasso, James Dean, Elizabeth Taylor, Jean Cocteau and Colette. Which were published in Vogue, People, Elle, Harper's Bazaar and Paris Match magazines. The photographs of the visit to Georges Braque's studio, on which the reverse of our still life was clearly recorded, are now in the collection of the Los Angeles County Museum of Art, along with several thousand other photographs by Sanford Roth.
Similar to Paul Cézanne or Giorgio Morandi, Braque succeeds in adopting the subject of the still life as his own. The painting offered here is both a document from the peak of the artist‘s career, as well as a testimony of the height of his artistic creativity.
With his passionate exploration of the formal properties and possibilities of painting, the use of bold, bright colors and the skillful dissection of the pictorial space, which becomes evident here, this work contains clear indications of a development of earlier still lifes from the Cubist and Fauvist periods. Due to the rejection of the naturalistic representation and the clear focus on form, color, composition, as well as the successful implementation of the real world around him into a two-dimensional, no less tangible, haptically appealing and deeply poetic pictorial language, this is just a wonderful example of the majestic interiors from his late creative period, as well as a work of utmost opulence and an extraordinary visual presence. [CH]
More Information
+
Bidding Options
+
Bid by telephon / written
+
Contact a specialist
+
Buying from A-Z
+
Preview & Auction Procedure
+
Catalogue Order
+
Register for
Georges Braque
+
Georges Braque Biography
+
Sell
Get a free appraisal for a similar object!
Share 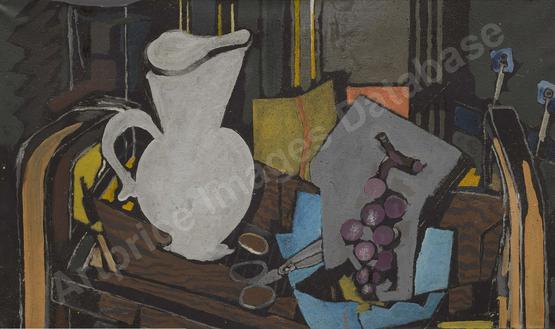 Resale right apportionment:
In accordance with §26 of German Copyright Act, a droit de suite charge of 2.4% including VAT is levied for original artworks and photographs for the compensation of the statutory right of resale.
Georges Braque - lots sold by Ketterer Kunst
+
all