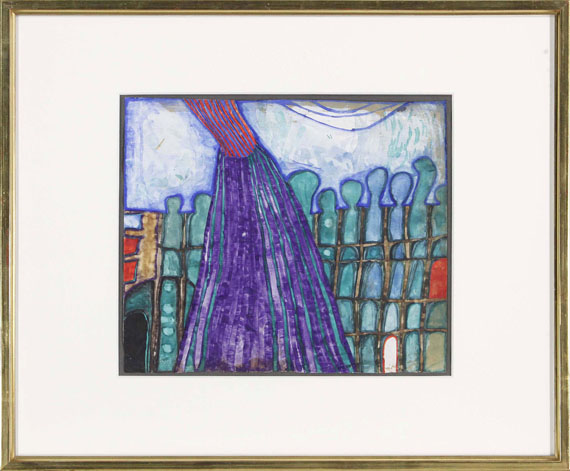 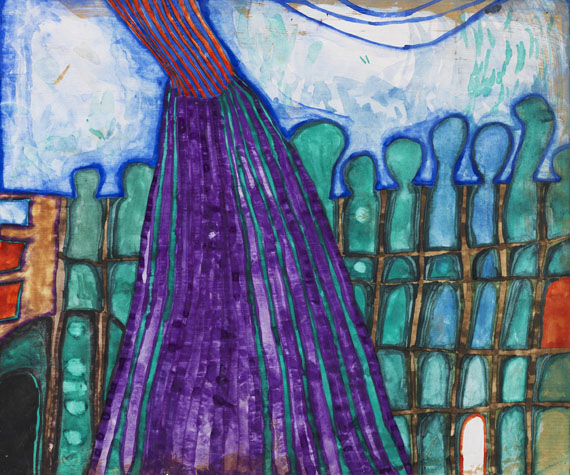 • For the first time offered on the international auction market.
• Family-owned for more than 50 years.
• The work shows the influence of Japanese art and culture on Hundertwasser's early creative period.

Hundertwasser, a multidisciplinary artist who is alternately a painter, architect and performer, stated that "the straight line is atheistic and immoral". His world is a world in which space is structured in curves and spirals that wind and unfold around themselves. His style is singular and cannot be assigned to any -ism. No art academy would hold him for long. After graduating from high school, the artist spent three months at the Academy of Fine Arts with Prof. Robin Christian Andersen. In Paris he wanted to continue his artistic training at the Ecole des Beaux-Arts, but he left it day one. He had found seminal impressions on his numerous, sometimes adventurous trips, among othrs, to Morocco, Tunisia, Tokyo and Siberia since the 1950s. The early 1960s brought great recognition and personal changes for Friedensreich Hundertwasser. In 1961 the artist traveled to Japan for seven months at the invitation of the Japanese art dealer Yamamoto, where he exhibited at the Tokyo Gallery and at the 6th International Art Exhibition, the Tokyo Biennial at the Metropolitan Art Gallery and he won the Mainichi Prize. In the course of the 1960s, the artist achieved numerous great successes, such as a retrospective in the Austrian pavilion at the Venice Biennial in 1962 or in 1964 with a retrospective at the Kestner Society in Hanover, which, as a traveling exhibition, also had stops in Amsterdam, Bern, Hagen, Stockholm and Vienna. The exhibition was organized by Wieland Schmied, it was the 100th exhibition after the war. With the exhibition catalog the Kestner Society published Hundertwasser's first oeuvre catalog. Stylistically, "Une Journée de transit en Allemagneavec grande cheminée Fujisan" comes from a new phase. Around 1960, Hundertwasser slowed the painting process down and the forms began to solidify, the spontaneity of some of the works from the 1950s gave way to a more concrete formal language. In doing so Hundertwasser tells a story about longing, home and freedom.
Hundertwasser painted on wrapping paper, as well as on handmade paper, on jute, on silk or tea towels. No material is unusual for him not to be painted. He uses watercolors, egg tempera and gold dust, as well as poisonous colors such as Schweinfurt green and Chinese cinnabar. And Hundertwasser painted everywhere, whether in his country house in Normandy, his studio in Venice, his apartment in Vienna, when staying with friends and while traveling. The present watercolor was created while traveling through Germany between Stuttgart and Vaihingen on February 17, 1962. The poetry of his works begins with the materials used, the places where he paints them, with the thoughts and associations that the artist has while painting. Eventualy, they are perfected by their titles. Titles have not been so poetic since Klee. In "Une Journée de transit en Allemagneavec grande cheminée Fujisan" Hunderwasser takes us with him on his journey. An active volcano towers in the landscape in a glazed, luminous color. The impressions gained on his trip to Japan in 1961 are still fresh, and suddenly Mount Fuji appears near Stuttgart. The whole composition is made up of lines that stretch across the surface like a grid. With its vibrant color palette and spherical proportions, in which every element in the room seems to dance, this composition perfectly illustrates his quest to restore the wonders of nature. Hundertwasser meticulously cataloged his works. He was extremely serious about everything that concerned his works, his catalog of works, which he began in 1954 during a lengthy stay in hospital, is like a diary. He tried to stay in touch with every single one of his pictures. On the reverse there is an instruction from the artist that the work is to be treated and kept well at all times, that it must be made available for exhibitions, and that every change of ownership must be reported to him. [SM]
More Information
+
Bidding Options
+
Bid by telephon / written
+
Contact a specialist
+
Buying from A-Z
+
Preview & Auction Procedure
+
Catalogue Order
+
Register for
Friedensreich Hundertwasser
+
Friedensreich Hundertwasser Biography
+
Sell
Get a free appraisal for a similar object!
Share

FRIEDENSREICH HUNDERTWASSER
Das Ding das sich..., 1957
Sold: € 122,000
More offers for Friedensreich Hundertwasser
+
and all other offers
You might also be interested in
+
and all other offers
Buyer's premium, taxation and resale right apportionment for Friedensreich Hundertwasser "Une Journée de transit en Allemagne avec grande cheminée Fujisan"
This lot can be purchased subject to differential or regular taxation.

Resale right apportionment:
In accordance with §26 of German Copyright Act, a droit de suite charge of 2.4% including VAT is levied for original artworks and photographs for the compensation of the statutory right of resale.
Friedensreich Hundertwasser - lots sold by Ketterer Kunst
+
all