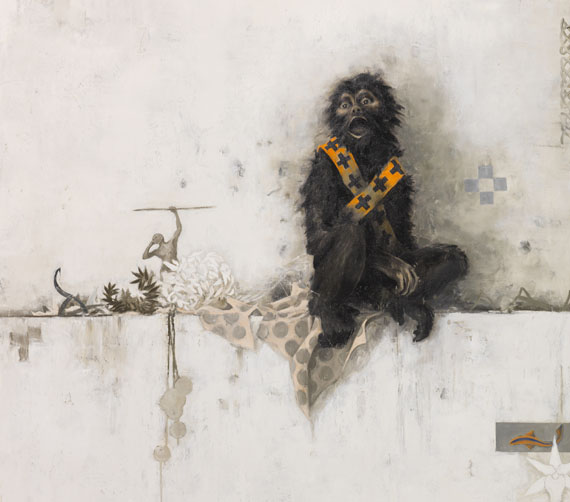 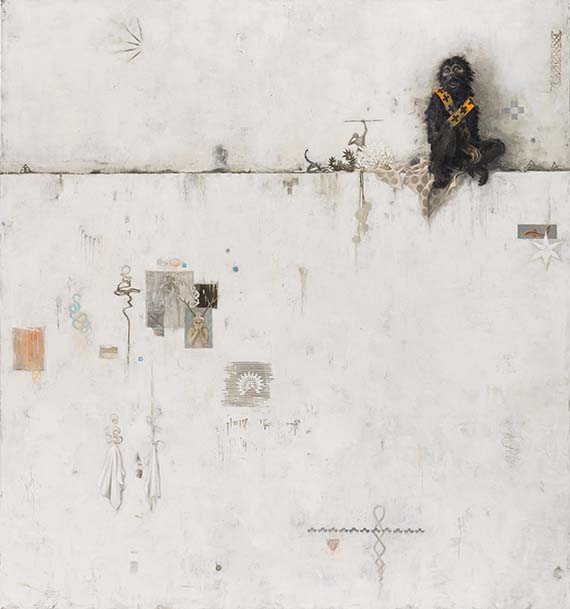 LITERATURE: Axel Heil, Wolfgang Schoppmann, Most wanted - The Olbricht Collection, some recent acquisitions, Cologne 2005, p. 221, illu. on p. 68.
"I don't want to illustrate the zeitgeist but paint the timeless. I have to paint big, small won't work. I want recognizability, not Naturalism. That's why I use figures and things from all over the world, there is the Roman emperor and the eskimo, an Indian guru and a black slave. That may seem historical or mystical, but what I do is just a symbolic painting, as they problems people had in the past are the same that we have today."
Jonas Burgert

Jonas Burgert's world of images goes hand in hand with the principle of collage: the combination of already existing views and materials, their alteration and removal from their original context. With structures composed of set pieces, realities and contextual relationships also change. Figures, animals and objects in different proportions are put into a relationship with one another. What does the character have to do? Is it entering into a dialogue? Inhomogeneous relations arise. Things are exchanged and reassembled as a matter of course. They are brought into direct relationship in a pictorial architecture, individual realities grow into scenic structures and supposedly make the motif readable. From the very beginning on Jonas Burgert has used the innermost essence of the collage for his works: the quotation. He quotes from various sources, deracinates his found objects from their original context, transfers them into their own artistic technique and thus creates the illusion of an inner connection. Burgert – and this is just an assumption - uses the collage to visualize amazing, strange and perhaps also inspired connections. But at the same time, Burgert provokes instability in the viewer and accepts illegibility. It is deceptive that Burgert stages elements that we have long stored in our collective memory, and thus possibly triggers the desire in us to decipher the pictorial puzzle, the iconographic derivation of the motif or to analyze the reasons for its aesthetic implication. Burgert's pictures make you curious! In “Verräter“ (Traitor) we meet a crouching monkey, a chimpanzee, who has taken a seat on the ledge of a wall in the upper right corner of this large format. He wears yellow-orange sashes with cross motifs and sits on a finely patterned cloth. His mouth is wide open, as if he screamed one of those heartbreaking sounds that echo through the jungle. To the left of the monkey, Burgert develops a hunting scene with bow and arrow and places other things on the narrow podium. The shimmer of a half rosette closes the area of the upper stage. The artist pastes the 'big' wall underneath like a billboard, creating a setting with ornamental scribbles that leaves room for a wide range of interpretations. Thus autonomous pictorial elements are brought into relation and get a different meaning. A meaning that goes beyond the basics and into a pictorial illusion. Similarity and memory are consciously used to captivate the viewer, to make him believe that he can decipher what he sees and interpret it, that he can remember the old place, the source of the new appearance. Burgert takes over the motif. He has cleaned it and has removed coherent structures and inserted it into a new combination of pictorial ideas. There is certainly a causal connection in Burgert's pictures, which can not only be aligned with the complexities of the content, but is primarily held together by the intensely painterly pattern of the picture. The artist predominantly uses role behavior and references to reality, and it is only through the staging of simultaneity and coincidence (?) that their existence appears absurd and trivial. He does not answer the question of reality, of historical derivation, of how the content can be described. They remain the artist's secret. And that‘s what moves us! [MvL]
More Information
+
Sell
Get a free appraisal for a similar object!
+
Register for
Jonas Burgert
+
Buying from A-Z
+
Contact a specialist
Share