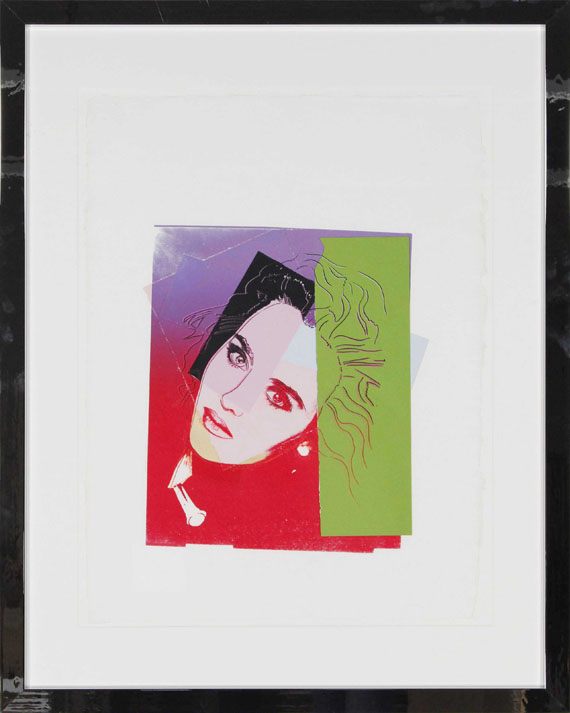 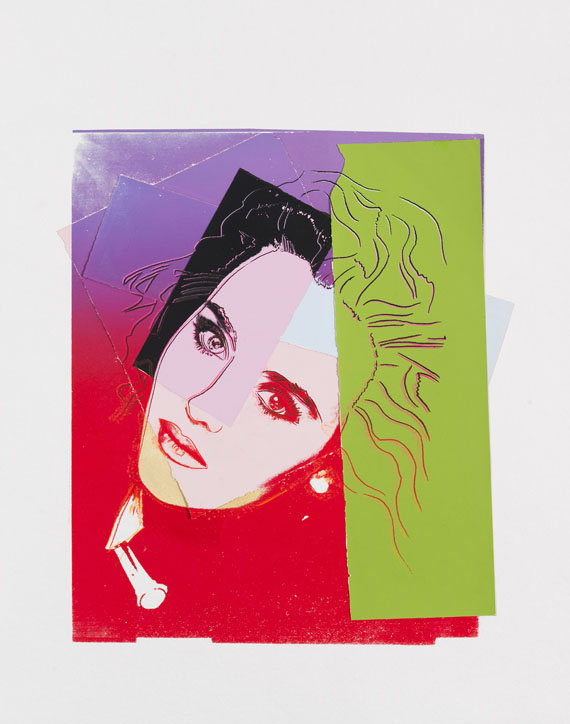 • Unique object.
• In the 1980s Isabelle Adjani was a famous moviestar and adorned the covers of Vogue and Elle many times.
• Warhols portraits of the world of glamor were crucial for his international fame as the most important representative of Pop-Art.

PROVENANCE: From the artist's estate.
The Andy Warhol Foundation for the Visual Arts, New York.

"If you want to know all about Andy Warhol, just look at the surface: of my paintings and films and me, and there I am. There’s nothing behind it."
Andy Warhol

Andy Warhol's portraits of movie and rock stars, first and foremost of Marilyn Monroe and Mick Jagger, were largely responsible for the international fame of today's most prominent representative of American pop art. Lurid and striking, Warhol's art has not only found its place in American art history, it also receives highest attention on the international art market on regular basis. The eccentric loner Warhol, as a photographing observer, has become the silent chronicler of his time. The present portrait of the French actress Isabelle Adjani, who in 1975 was the youngest actress nominated for the Oscar for her role in François Truffaut's film "The Story of Adèle H.", is - like the other star portraits of the artist - based on a photographic template. Usually either a newspaper or magazine clipping or a photo from his archive mark the starting point of Warhol's artistic work. At the end of each photo session in Warhol's "Factory", in which he shot photos of fellow artists and stars he was friends with, there was a strict selection process in which Warhol, together with the respective model or his assistant, filtered out the best shots that should later provide the formal basis for his graphic works and paintings. In Adjani, who became famous mostly for playing tragic female figures, Warhol, who was always thin and pale and suffered from the trauma of being excluded in his youth, may have recognized himself in the actress in a certain way. [JS]
More Information
+
Sell
Get a free appraisal for a similar object!
+
Register for
Andy Warhol
+
Buying from A-Z
+
Contact a specialist
+
Andy Warhol Biography
Share