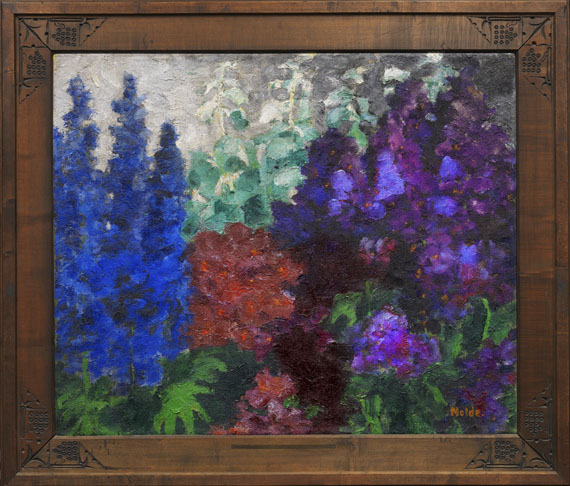 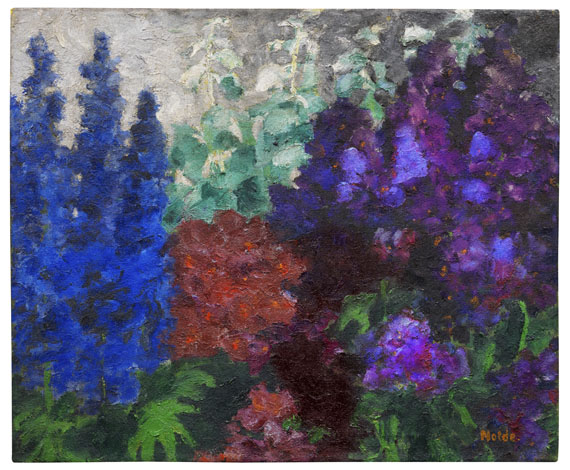 • Consistent provenance: family-owned for almost 90 years.
• In the original wooden frame carved by Emil Nolde.
• Remarkable exhibition history - among others shown in the traveling exhibition "Neuere deutsche Kunst", probably the most important modernist exhibition project at the end of the Weimar Republic.
• Particularly radiant work from the 1920s, a time when the garden pictures became flower pictures detached from spatial relations.
• Nolde models and portrays the flowers from his garden in impasto colors.
• Offered on the international auction market for the first time.

"These are such quiet and beautiful hours when one walks or sits between the fragrant and blooming flowers on a peaceful summer day, I want my pictures to give something of this beauty, as I myself have this feeling in front of the pictures - the first beautiful happiness - a strong sympathy I won‘t be able to hold back"
quoted from Emil Nolde, Manfred Reuther (ed.) Emil Nolde. Mein Garten voller Blumen, p. 18

Born as a farmer's son, Emil grew up following the rhythm of nature. A way of life that adapted to the change of seasons and the course of the day. A deep connection to his northern German homeland and its landscape grew from this. This strong rootedness lead the artist to adopt the family name Nolde - after the village in which he was born - when he married Ada. Flowers possess a strong symbolic value for Nolde. They are inextricably linked to the memories of his childhood home. His mother took care of the house and tended the garden and the flowers in the house. Nolde clearly remembers walking through the garden with his mother when he was young while she tended to the plants, picking roses with her delicate hands and shaving the sharp thorns from the stems. In addition to their charm, Nolde sees flowers as a clear example of the eternal cycle of birth, life and death, which is the basis of all of nature. Fascinated by their beauty, but aware of their transience, Nolde sees a romantic, almost tragic symbol of life itself in the flowers: "The blooming colors of the flowers and the purity of these colors, I loved them so much. I loved the flowers in context with their destiny: shooting up, blooming, shining, pleasing, falling, withering and finally thrown into the pit. Our human destiny is not always that consistent and beautiful" (Emil Nolde quoted from: Martin Urban, Emil Nolde – Blumen und Tiere, 1965 , p. 7/8). With his garden pictures, Nolde gives the viewer a feeling for this symbolic power and uses it as a channel for his artistic expression. Wherever Nolde and his wife settled, they planted a garden. As plans to reclaim land by enclosure threatened to destroy the landscape around Utenwarf, the Nolde couple was forced to give up their home there. In 1927 they acquired an empty dwelling mound, on which they build the Seebüll residence and studio building by 1937. They wrest a large area from the swampy march. To use this as a flower garden, they dug drainage ditches and erected high reed walls to protect the garden from the wind and storms that often occur in this area. As early as in 1928, Nolde was able to report to his longtime friend Hans Fehr "about our young garden with its swelling wealth of flowers," "more beautiful than we've ever had before." The garden, laid out in the shape of their initials A & E, soon came to life and became a source of pride for the Noldes, and its lush abundance of flowers inspired Emil Nolde for the rest of his artistic career. Initially, the garden pictures are still recorded as a complete ensemble, Nolde captured the exuberant abundance of flowers in their entirety on the canvas, with no preliminary studies or preliminary drawings required. He worked right out of the moment. Since the 1920s, the flower heads have become the main protagonists of the composition. Seen in close-up, directly as a detail, they form a dense, magnificent carpet of flowers, bursting with vivid colors and a powerful, vibrant energy. They are an expression of the artist's heartfelt and lifelong adoration of nature.

A special frame
In 1884, Nolde began an apprenticeship as a furniture carver at the Sauermann furniture factory in Flensburg. In contrast to the sculptor, the furniture carver specializes in ornaments. Nolde incorporated this ability into the design of the frames for his paintings and devoted the greatest attention to the framing of his pictures. Many expressionist artists designed and built their own frames. The frame becomes part of the work of art, picture and frame should form a harmonious unit. The gilded decorative frames common at the time did not correspond to Nolde's ideas. His frames are characterized by a modern simplicity. Nolde designed his frames with carved corner ornaments or decorates entire frame bars with carvings. He exactly adapted the bars to the picture, in our case he picked up the spherical flower shapes and stylizes them for the corner ornaments. The floral motif extends beyond the edge of the picture. A happy coincidence that this special unity of painting and frame was recognized and preserved as a total work of art.

Exhibition and history
“In the pictures that Nolde painted after he had turned sixty, one notices new youth rather than old age. They are mature works with all the signs of a great past, but at the same time with all the characteristics of an even greater present. Some have such a strong Old Master appeal as if they had been painted a long time ago, their tunr so noble, the colors seem to melt into one another like enamel, and yet there is nothing of the past about them, rather something temporal that teaches us to understand and love people and things that we were about to forget (..).” With these words the great art critic Will Grohmann began his essay released in the sixth volume of the “Blätter der Galerie Ferdinand Möller Berlin” in February 1930. The art magazine also served as a catalog for a Nolde exhibition in which the still very young painting "Rittersporn und Silberpappeln" had its first public appearance. This is nothing less than the prelude to a great exhibition history, of which the back of the picture and frame also provide impressive testimony: Following the show at Möller, the work apparently made a guest appearance at the renowned Hamburg gallery Commeter in March and April 1930, from May to October 1930 it was on display at the Munich Glaspalast, and finally, according to a label on the back, it was shown at Kunsthaus Schaller in Stuttgart in October and November 1930. The art associations in Hamburg and Kassel also showed "Rittersporn und Silberpappeln ", as labels on the reverse suggest. In the summer of 1931 the painting was presented in Frankfurt at the famous Städel Art Institute. The collector Carl Hagemann also saw the picture here. He wrote to Emil Nolde on December 30, 1931: “The exhibition that Mr. Wichert put together in the Städel in summer was very nice, by the way, your pictures in particular, which were shown together on one wide wall, left a great impression on everyone (..) ". (Quoted from Hans Delfs, Mario von Lüttichau, Roland Scotti, Kirchner, Schmidt-Rottluff, Nolde, Nay. Briefe an den Sammler und Mäzen Carl Hagemann, 2004, p. 323)

The traveling exhibition of 1932
Up to this point, that alone would be an outstanding exhibition history. But the highlight is yet to come: what was probably the most important exhibition project for Modernism at the end of the Weimar Republic, the traveling exhibition “Neuere Deutsche Kunst”. From January to July 1932, this show, to which Markus Lörz dedicated a more than 400 page-strong work, toured Norway, Denmark and Sweden. It had its final stop in Cologne. “Rittersporn und Silberpappeln" was shown at all stops of this epochal traveling exhibition. It was Ludwig Thormaehlen, curator of the Berlin National Gallery, who was responsible for the conception. The Foreign Office, in return, provided financial assets for the the international show, with which progressive modernism had one its last outstanding appearances before the Nazi era - accompanied by violent protests from the reactionary camp, which was already expanding in 1932. As far as Nolde's works are concerned, the artist himself made the preselection. On December 22, 1931, Nolde sent a list, including prices and insurance values, to the National Gallery. At the same time, the pictures, including “Rittersporn und Silberpappeln”, had already been sighted at the Kronprinzenpalais. And still in the afternoon of the same day December 22, an express shipment went to Oslo, where the first exhibition station was scheduled to open on January 8, 1932 (Markus Lörz, Neuere Deutsche Kunst: Oslo, Copenhagen, Cologne 1932. Rekonstruktion und Dokumentation, Stuttgart 2008, pp. 152, 175). Historical photographs of this show have also been preserved. The view of the rhythmic "Nolde Wall" with "Rittersporn und Silberpappeln" in the original artist's frame is still impressive today.

The "Gallery of the Living"
When "Rittersporn und Silberpappeln" returned from its big tour, Nolde's 65th birthday on August 7, 1932 was just around the corner. A good reason for Ludwig Justi, the director of the National Gallery, to rearrange the "Nolde Hall" in the Kronprinzenpalais. "Rittersporn und Silberpappeln" was also selected for this. The Nolde Hall was part of Justi's famous " Galerie der Lebenden“ (Gallery of the Living), in which entire walls or even rooms were dedicated to expressionist artists, including Heckel and Marc, Lehmbruck, Kirchner and Schmidt-Rottluff. Justi gave Nolde the middle hall, the heart of this gallery level. Here "Rittersporn und Silberpappeln" witnessed to the ominous change of times. In the summer of 1933, Justi was deposed from his post, and in November Eberhard Hanfstaengl became director with the assignment to "cleanse" the department of modern art. The "Gallery of the Living" now was a thing of the past.

1933-2022
It is probably no coincidence that “Rittersporn und Silberpappeln“ was put up for sale at almost the same time. On November 16, 1933, the National Gallery handed the work over to the art dealer Ferdinand Möller, who would soon sell it. Privy Councilor Gustav Brecht from Cologne, the CEO of Rheinische Braunkohle AG, acquired the work. Nolde himself then noted on his list of works “Geh. Brecht, Köln" as the owner of "Rittersporn und Silberpappeln". Nevertheless, every further trace of the painting has now been lost for almost four decades. It was not until 1971 that Martin Urban was able to locate the son of the privy councilor, who owned the painting at the time. To this day, “Rittersporn und Silberpappeln“ has been family-owned. This is a rare stroke of luck for this painting: a closed provenance coupled with a great international exhibition history. [SM/AT]
More Information
+
Sell
Get a free appraisal for a similar object!
+
Register for
Emil Nolde
+
Buying from A-Z
+
Contact a specialist
+
Emil Nolde Biography
Share