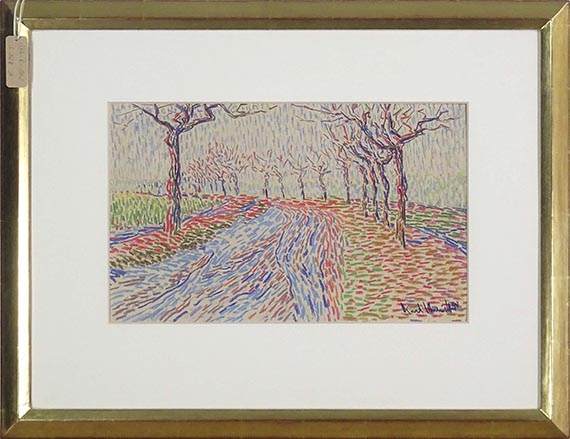 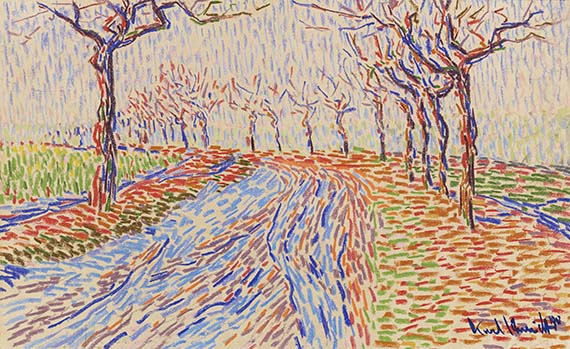 • Apart from Hermann Gerlinger, this sheet has a notable provenance with the collector couple Peters as its first owners, they were among the earliest patrons of Schmidt-Rottluff.
• "Landstraße im Frühling" is the only work in this manner and from this period that has ever been offered on the international auction market (source: artprice.com).
• Significant exhibition history.
• The play with the radiant colors characterizes this top-class sheet that is vibrant with atmosphere and emotionality.

The watercolor is documented at the Karl and Emy Schmidt-Rottluff Foundation, Berlin.

On April 17, 1905, Karl Schmidt applied to enroll at the Royal Saxon Technical University in Dresden and eventually became a student in the summer semester. He initially had an apartment on Rosenstraße 64 and dutifully attended classes for two semesters. The high level of expressiveness and the dynamic formalism of the artistic environment in Dresden appealed to him very much. In addition, Schmidt-Rottluff found a role model in Vincent van Gogh, who to him embodied a new freedom in art, a detachment from Art Nouveau and Impressionism. He also reacts intensively to the powerful palette, which plays a central role in van Gogh's work. In the future, Schmidt-Rottluff's pictures would have a certain notion of a painterly monumentality, a similar struggle for an expressive language. Van Gogh's painting, which he only had access to as illustrations at the beginning of 1905, had something that opened up a fundamentally self-evident art for the young Schmidt-Rottluff, who was not restricted by any tradition: expression and form. He encountered artistic inspiration as a student in the "Kunsthütte" in Chemnitz, where works by German representatives of Naturalism, Impressionism and plein-air painting were shown around the turn of the century. In Dresden, Schmidt-Rottluff's unconventional artistic approaches were met with fruitful debates. In contrast to the situation in Chemnitz, the young student was confronted with a broader art- and culture scene in Dresden and, last but not least, the four "Brücke" founders met at the university to officially form an artist group in the early summer of 1905. For Schmidt-Rottluff, the depiction of landscape became a field of experimentation: an expressive color palette, as here applied with colored chalk, contrasted with the traditional subject of a landscape in the Ore Mountains. The play with the effect of color through the placement of light reflections, the suggestion of the seasons, not only in the title, with the bald trees through the use of pure, bright colors characterize this top-class sheet. The drawing is composed with a mixture of delicate and strong strokes, which emphasize the character of the landscape. At the beginning of his great career as a painter, the young artist had a groundbreaking ability to express feelings and emotions directly and powerful through his painting style, as he had seen it in van Gogh and was able to visualize this early experience in his landscapes from 1905 and 1906. [MvL]
More Information
+
Sell
Get a free appraisal for a similar object!
+
Register for
Karl Schmidt-Rottluff
+
Buying from A-Z
+
Contact a specialist
+
Karl Schmidt-Rottluff Biography
Share