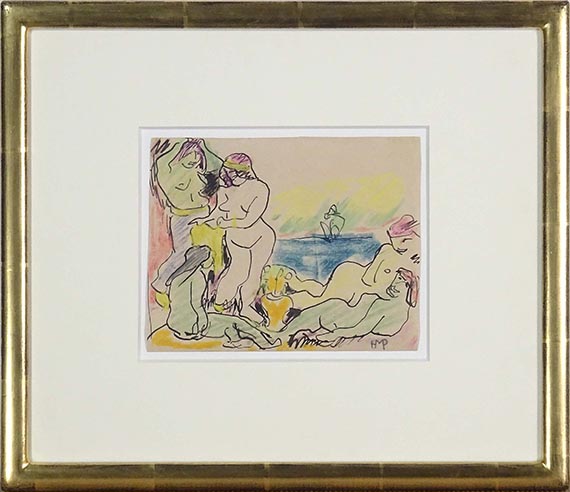 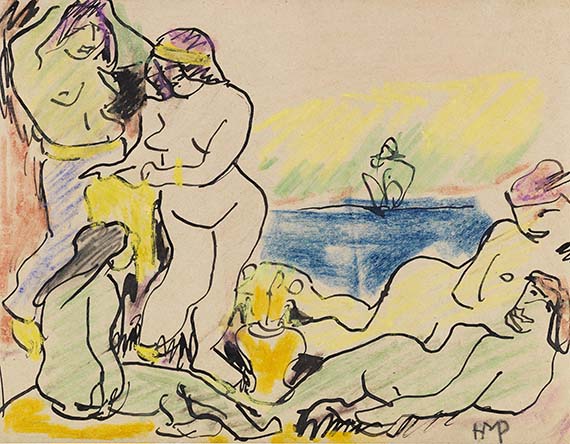 In 1908, the artist initially spent three months in Italy before going to Paris for a nine-month stay in December. Here he encountered the art of the "Fauves", including the works of Henri Matisse, as well as works by Paul Cézanne, which had a lasting impression on him. Shortly afterwards, he was the first "Brücke" artist to leave Dresden for Berlin, where he met his future wife Charlotte "Lotte" Kaprolat, who would frequently sit for him in the years to come. Lotte was also the model, as the artist later confirms in his "Memoirs", in the painting "Das gelbe Tuch" (Soika, 1909/47), created in 1909 and considered lost today. The present depiction, and in particular the group of figures on the left, undoubtedly served as a preliminary drawing. The painting was one of the main works of Pechstein's creative period at that time. In his "Memoirs" he wrote in retrospect: "'Das Gelbe Tuch', the 'Gelben Tulpen' and the landscape were accepted for the Secession. I was the first among my fellow 'Brücke' comrades to achieve this goal." (Pechstein, in: Leopold Reidemeister (ed.), Erinnerungen. Max Pechstein, Munich 1963, p. 33).
At the same time, our drawing with its strong colors, shows great resemblance to the paintings "Nach dem Bade" (Soika 1909/46, lost) and "Zwei Mädchen" (Soika 1909/48, Germanisches Nationalmuseum, Nuremberg). In equal parts, it shows both the pose of the female semi-nude folding her arms over her head in the Nuremberg painting and the pictorial composition of the reclining and standing female nudes in "Nach dem Bade". In this respect, it is also reminiscent of Cézanne's "Les Grandes Baigneuses" (1906, Philadelphia Museum of Art) to a certain extent, but the "Brücke" artist approached the artistic goal he had already defined at that time as "capturing man and nature in one" in a bold, clearly expressionist manner (ibid., p. 50). The drawing alone, with its bright colors, a strong yellow, fresh green and unusual violet, shows him as a self-confident artist who had long left traditional academic color theory behind him. On the occasion of the second collective "Brücke" exhibition in Dresden in 1909, the closely related painting "Nach dem Bade" with a similar motif found mention: "Pechstein is represented with a great public shock [..]. He is even more powerful, more gripping than Kirchner, especially in terms of colors." (Paul Fechter, 6.9., quoted in Soika, vol. 1, p. 201). A few years later, the art historian Max Osborn wrote about the painting "Das Gelbe Tuch" in retrospect: "But no one dared to approach 'Gelbes Tuch' yet. The wild carnality of the two standing women, fabulously modeled, outlined by energetic contours, seemed to dare the utmost in sensual nonchalance [..]" (1922, quoted in: Soika, vol. 1, p. 202).
Pechstein would intensively examine the motif of the female nude in the landscape and the connection between man and nature throughout his life. In August of the year the present drawing was created, Pechstein visited the Moritzburg Ponds together with Kirchner and Heckel for the first time. That year he also spent his first summer in Nida on the Baltic Sea, where he would return to again and again over the following years. Far from the big city, he not only found the retreat he had longed for so much, but also an intense experience of nature that he had always sought and idealized, both in private life and in his art. [CH]
More Information
+
Sell
Get a free appraisal for a similar object!
+
Register for
Hermann Max Pechstein
+
Buying from A-Z
+
Contact a specialist
+
Hermann Max Pechstein Biography
Share