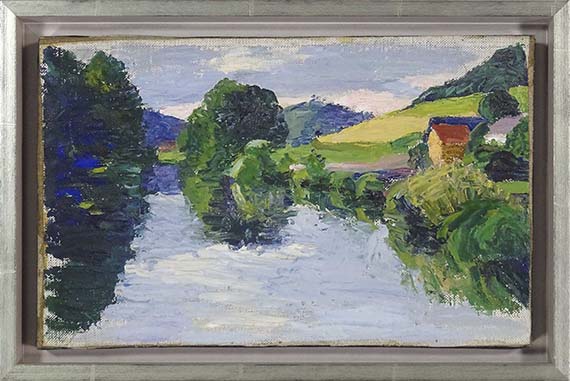 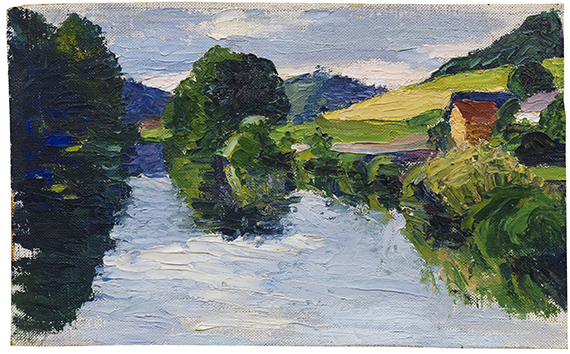 • Made during a summer stay in Kallmünz with her class of the Phalanx art school.
• These very early small oil sketches are considered milestones in Gabriele Münter's oeuvre.
• Complete provenance.

Accompanied by a written confirmation issued by the Gabriele Münter- and Johannes Eichner-Foundation on March 4, 2020. The painting will be included into the catalog raisonné of Gabriele Münter's paintings.

The "Phalanx" was not only the private painting school where Kandinsky used to teach as of 1901 and where Gabriele Münter became his student and later lover, "Phalanx" was, above all, a group of progressive Munich artists such as Kandinsky and Wilhelm Hüsgen who founded it in order to create a counterbalance to the overpowering academicism of Franz von Lenbach in Munich during the era of the prince regent. The exhibitions organized by the "Phalanx" also featured works by French avant-garde painters such as Claude Monet, Paul Signac and Félix Vallotton. Kandinsky implemented their ideas of plein-air painting in his painting class with painting trips to Kochel in 1902 and to Kallmünz in 1903. Our beautiful, early river landscape was probably created in the area around Kallmünz. Gabriele Münter succeeds in capturing the atmospheric mood of the summer day in all its facets. The peculiarity of the paint application with a small spatula also shows very well here. The paint is applied directly to the canvas and the shades of color are juxtaposed on the canvas, sometimes drawn into one another and mixed. The result is a depiction that is extremely dynamic in terms of its surface structure, as can only be found in these early, small-format paintings by Gabriele Münter. [EH]
More Information
+
Sell
Get a free appraisal for a similar object!
+
Register for
Gabriele Münter
+
Buying from A-Z
+
Contact a specialist
+
Gabriele Münter Biography
Share