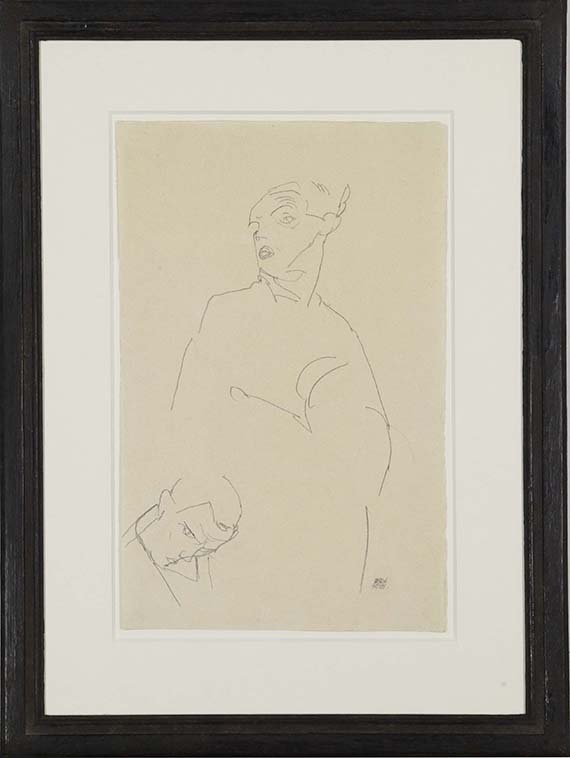 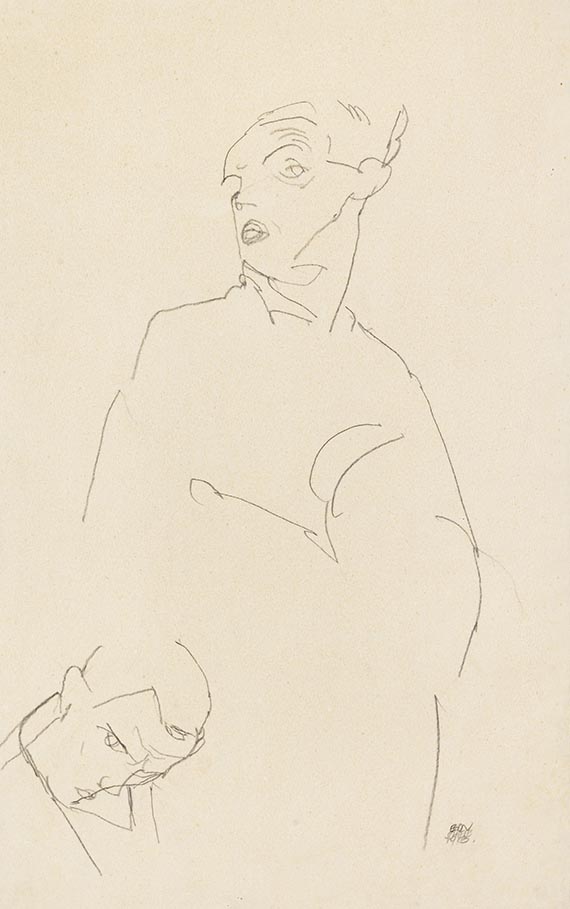 • Masterly drawing with a poised and precise line.
• Double self-portrait: Schiele depicts himself in two different poses.
• One of only five self-portraits on paper offered on the auction market over the past ten years (source: artprice).
• From the artist's esate.
• Part of the same private collection for more than 40 years.

PROVENANCE:
From the artist's estate (with the estate stamp on the reverse).
Serge Sabarsky, New York.
Private collection Southern Germany (since the 1970s).
Ever since family-owned.

"When I see myself entirely, I will have to know myself and also know what I want, not only what is going on inside of me, but to what extent I am able to see what means are mine, what mysterious substances I am made of, how much more of what I recognize, what I have recognized in myself up until now."
Egon Schiele in a letter to Oskar Reichel, September 1911, quoted from: Egon Schiele Jahrbuch, vol. I, Vienna 2011, p. 121.

The young Egon Schiele found his very own, unmistakable style, a clearly Austrian form of Expressionism, as early as in 1910. In 1909, after just two years of studies, he left the Vienna Academy of Fine Arts and founded the the "Neukunstgruppe“ (New Art Group) with former fellow students in protest against the conservative views taught at the academy. Schiele's works, his provocative, often grotesque nudes and idiosyncratic self-portraits are both symptomatic and groundbreaking for his time. With his work, Schiele finds "visual analogies on the level of fine arts for those in philosophy, psychology, literature and theater in Vienna around 1900 that were the subject of so many different crises of the individual" (www.leopoldmuseum.org/de/sammlung/egon-schiele). Schiele's works, and in particular his self-portraits with twisted limbs, wide open eyes and mouths, attitudes and proportions stretched to extremes and strained, are an expression of the loss of control felt at the time and the existential crisis of the individual. This can also be seen in the drawing offered here, both in the facial expression, the open mouth and the posture of the larger self-portrait turned sharply to the left, as well as in the almost angry look of the strangely crooked smaller self-portrait. From 1910 until his far too early death in 1918 at the age of only 28, Schiele not only dealt with the extreme, sometimes completely deformed postures and poses in his self-portraits in an almost manic and obsessive manner, but also in particular with his own psyche. In this reflection of one's own existence and its contradictions, as well as in the exploration of human and one's own sexuality as artistic inspiration, depictions with exaggerated, sometimes ugly, sometimes even disturbing facial expressions, grimaces and gestures emerged in these years. His oeuvre, which focuses on the figure, the nude and the self-portrait, thus functions as a depiction of the emotional mood radicalized and dramatized by Schiele, which ultimately made him one of the most influential, dazzling and probably most interesting figures of Viennese modernism. [CH]
More Information
+
Sell
Get a free appraisal for a similar object!
+
Register for
Egon Schiele
+
Buying from A-Z
+
Contact a specialist
+
Egon Schiele Biography
Share