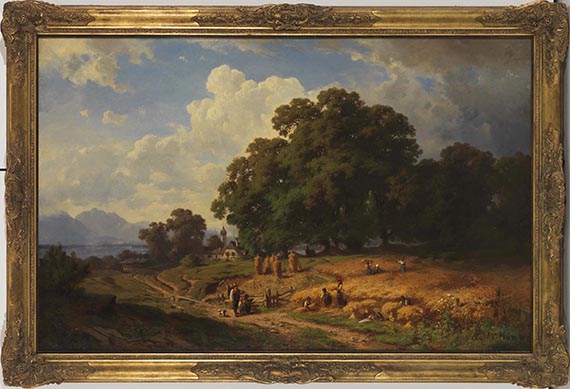 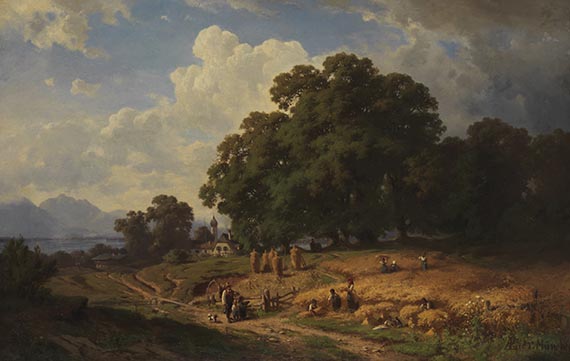 • Large-size work by Lier, excellent in terms of composition and technical mastery.
• Lier was one of the main representatives of the Munich School.
• Summery harvest motifs count among his most sought-after motifs.
• 14 of his works are in the Bayerische Staatsgemäldesammlungen, Munich.

PROVENANCE: Adalbert Karl
August Stier, Berlin (from 1928 the latest - 1934: Lepke Berlin).
Collection "Schwentz" (?), no place (acquired from the above in 1934).
Collection Georg Schäfer, Schweinfurt (with the label).
Private collection Bavaria (acquired in 2007).

Summer heat and the golden glow of the vast cornfields are the defining motifs in Adolf Heinrich Lier’s landscapes. Increasingly characterized by Realism, landscape painting in the mid-19th century had also embraced the motif of the crop harvest, exploring new artistic paths that linked landscape, genre and figure painting. Lier, who studied in Munich under Richard Zimmermann and later under Eduard Schleich, traveled to Paris in 1861 to find out about the latest developments in landscape painting. Though he was not particularly enthusiastic while in Paris, his impressions of the simple, unaffected approach of the Barbizon School were all the more powerful after his return to Germany, although the artistic clearly outweighed the social aspect in Lier’s work. The fundamental aspect here is a harmonious color tonality dominated by bright, warm and summery yellow, contrasted with the hazy, transparent blue of the mountain silhouettes of the distant Alpine foothills and the lake below. The imposing cloud formations arching across the sky echo the powerful bulky shapes of the large trees, lending the landscape an imposing expanse and grandeur despite the idyllic motif. Although the figures appear small in contrast, they are more than mere decorative accessories thanks to the detailed portrayal of their activities and the richness of their diversity. Lier captures women, men and children at work, devoid of all hardship and toil, nestled in warm and nurturing natural surroundings. A characteristic feature of the works attributed to the Munich School is their elongated format which suggests a continuation of the picture beyond the edges and hints at a panoramic expanse that reaches deep into the extended picture plane. With his landscapes still characterized by a certain romanticizing Realism but on the cusp of a pre-Impressionist style focusing on light and atmosphere, Lier became an influential figure in Munich landscape painting. [KT]
More Information
+
Sell
Get a free appraisal for a similar object!
+
Register for
Adolf Heinrich Lier
+
Buying from A-Z
+
Contact a specialist
Share