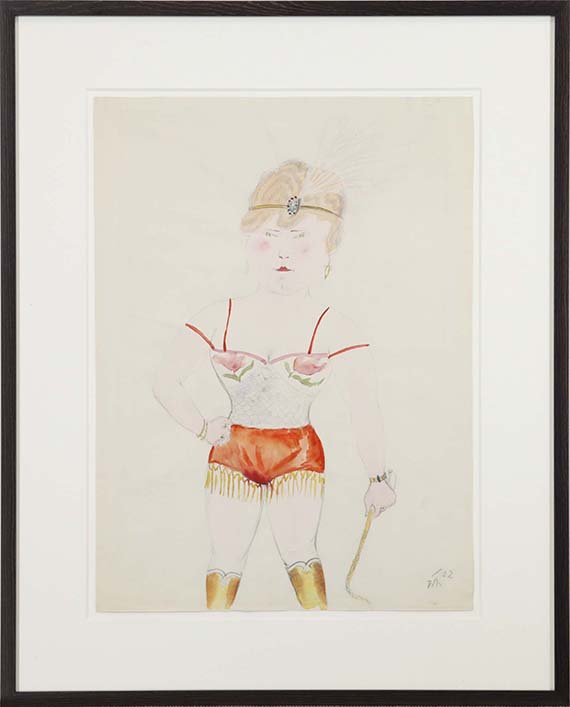 We are grateful to Mr Rainer Pfefferkorn, Otto-Dix-Stiftung, Vaduz, for his kind expert advice. The work will be included into the catalog raisonné with the number 1922/223.

PROVENANCE: The work is free from restitution claims.

In addition to the large number of important paintings that Otto Dix painted after the First World War, first in Dresden and then in Düsseldorf from 1922 to 1925, it is above all these watercolors and drawings that describe this epoch that contribute to the most productive years of his life. Two themes fascinate the artist at this time: the war and the whore. Dix dealt with his personal experiences of war, the terror of death, the victims among the civilian population and the cruelty of the brutalized soldiers in numerous pencil, chalk and charcoal drawings, which he made in the trenches at the front and which finally culminated in his main graphic work, the cycle “Der Krieg" (War, 1924), 50 etchings that address war even more brutally, directly and ruthlessly.

Dix also confronts the death motif with Eros, the life of the prostitute. The whore embodies vitality, she is life-affirming, but not romantic or naive, but similarly brutally realistic and anti-bourgeois, not to say "factual". The artist's first biographer, Fritz Löffler from Dresden, coined the phrase "disillusioning Eros". At the time, Dix made accounts of what he saw when he lived at the end of the Ziegelgasse in the brothel district of Dresden's old town in 1919, in a setting similar to that of Henri de Toulouse-Lautrec in Montmartre, Heinrich Zille in Berlin Wedding or Ernst Ludwig Kirchner around Potsdamer Platz in Berlin. "We don't need to discuss my pictures, we can see them. I start from what we see. I don't want to invent new themes, I don't want to arrange them [..]. I prefer to see the primal themes of humanity anew with my own eyes. The exterior of the things is important to me, because with the reproduction of the external form one also captures the interior", said Otto Dix years later in 1958. (quoted from Diether Schmidt, Otto Dix im Selbstbildnis, Berlin 1978, p. 222).

Dix found his models in the cafés on the Altmarkt, on Seestraße and on the Ring, approached women on the street who interested him and made them the protagonists of his exuberant brothel scenes or had them appear in sometimes bizarre scenes in the circus and variety shows. In 1922, Otto Dix self-published a portfolio entitled "Zirkus", consisting of ten etchings in which he portrayed the circus world and its artists. With their Jeunesse, the women embody the new beginnings and offer a welcome distraction from the horrors of World War I in the feverish big city life.

Our "Dompteuse" not only tames wild animals and lets them do rounds in the arena in an orderly manner, the lightly dressed lady with a whip or other kinds of equipment is also a welcome part of a time of oblivion in "safe" surroundings for men who are wild and thirsty for erotic adventure. In any case, it's hard to imagine that this lady with silky shiny, bright red fringed shorts and a tight top with flowers that emphasizes her bust size and a striking tiara in her hair is just taming wild cats in a cage set up in a ring filled with sawdust. Dix tells another everyday story, which he discovers in a distracted environment and reproduces it in his wonderfully direct, yet sensitive, detailed drawing: the tamer in an almost grotesque exaggeration as the disciplining heroine of the day.

When the "Schwabing Art Trove ", which was discovered in 2012, was presented to the public in January 2013 accompanied by broad media coverage, the two Dix watercolors "Dame in der Loge" and "Dompteuse" from 1922 also moved to the centerof attention. Soon indications were found that the sheets, which Cornelius Gurlitt had taken over from the inventory of his father, the art dealer Hildebrand Gurlitt, were originally from the collection of the famous Jewish lawyer and notary Dr. Ismar Littmann from Breslau. This origin also ennobles these works: Littmann was one of the most active and most important collectors of German Expressionist art.

Born on July 2, 1878 as a merchant's son in Groß Strehlitz in Upper Silesia, he settled in Breslau in 1906, where he soon married Käthe Fränkel. Ismar Littmann was admitted to the district court as a lawyer. He soon ran his own law firm, later together with his partner Max Loewe, and was promoted to notary in 1921. The wealthy lawyer Dr. Ismar Littmann was a generous patron and supporter of modern, progressive art. He was particularly committed to contemporary artists associated with the Academy of Fine Arts in Breslau, such as the "Brücke" painter and academy professor Otto Mueller. The proverbial “Bohemian artists from Breslau” is what Ismar Littmann shapes, promotes and accompanies as a collector and patron.

Beginning in the late 1910s, Dr. Ismar Littmann build up his soon to be famous art collection. The Littmann Collection includes works by well-known German artists of Impressionism and Expressionism, including Otto Dix, Otto Mueller, Käthe Kollwitz, Emil Nolde, Max Pechstein, Alexander Kanoldt and Lovis Corinth. Littmann had a close personal connection to some of those named. It was not until the global economic crisis in 1929 that the passion for collecting came to an end. By then, Littmann had collected almost 6,000 important works of art, watercolors, drawings and prints as well as paintings. In order to compensate for economic bottlenecks, Dr. Ismar Littmann offered parts of his collection at Paul Graupe's auction in Berlin on March 21, 1932. Among them was the work "Dompteuse", however, as the conditions for sales were difficult at that time, remained unsold and returned to the ownership of the collector.

Nevertheless: Littmann's economic worries in 1932 were not existential yet. Only the "seizure of power" by the National Socialists brought about abrupt change. The persecution of the Jewish lawyer began early and with great severity. His professional group was one of the first to be economically and socially destroyed by the National Socialists. From the spring of 1933, neither Dr. Ismar Littmann nor his son Hans (Edward) Littmann were able to pursue their profession. The youngest daughter Ruth could not even finish her high school exams, because she was arrested as she protested against the regime. Still a minor, she was put in prison for a year before she was able to emigrate to Israel. Deprived of his livelihood and joie de vivre, Ismar Littmann faced the ruins of a once glorious existence. Deep despair drove him to suicide on September 23, 1934. Ismar Littmann left behind his widow Käthe and their four children. With luck, the survivors were able to flee from National Socialist dictatorship.

Before despair drove the Breslau lawyer to suicide, Dr. Ismar Littmann was forced to sell a large bundle of almost 3,600 works of his graphics or to use them as security for a loan. His friend, the Breslau dentist Dr. Paul Schaefer, supported Littmann and took the works over. It is not known whether Schaefer actually acquired the paintings or whether they were merely a security for a loan from Schaefer to Littmann. In any case, Schaefer himself was not a collector, taking over the graphic works was a mere gesture of friendship.
The lots taken over by Paul Schaefer also contained the two Otto Dix watercolors "Dame in der Loge" and "Dompteuse" offered here. As a consignment by Paul Schaefer, who as a Jew was also persecuted by the National Socialists and was later forced to flee to South America with his wife, the watercolors were offered in the famous auction of the Littmann Collection at Max Perl in February 1935. It can be assumed that Schaefer was the owner, but not the owner of the sheets, because unsold works from his consignment at Perl did not go back to Schaefer after the auction, but to Käthe Littmann. Our two works of art, however, have a different fate – they never even got to the point where they were called up in the auction.

The auction at Perl went down in history. As early as in 1935, the discussion about so-called “degenerate art” flared up. 64 paintings, watercolors and drawings were confiscated by the Gestapo before the auction as examples of “cultural Bolshevik tendencies” and sent to the Berlin National Gallery the following year. Its director at the time, Eberhard Hanfstaengl, kept some of the works as "contemporary documents" and had the rest of them burned in the furnace of the Kronprinzenpalais on March 23, 1936 by order of the Gestapo (cf. Annegret Janda, Das Schicksal einer Sammlung, 1986, p. 69). Sources show that "Dame in der Loge" was also confiscated by the Gestapo in 1935 from the auction house's premises. There is a high probability that "Dompteuse" shared the fate. As part of the "Perl portfolio", the watercolors were confiscated again on July 7, 1937 as part of the "Degenerate Art" confiscation campaign, this time from the National Gallery. With a lot of luck, the two Dix works escaped destruction through the National Socialist rulers a second time – and ended up in the hands of Hildebrand Gurlitt.
When exactly he acquired the two watercolors can no longer be reconstructed today. In any case, from around the end of 1938, Gurlitt was one of the four art dealers (along with Böhmer, Buchholz and Möller) who had access to the National Socialist depots in Schönhausen. In the period between 1939 and 1941, several commission and barter transactions took place, in which he probably took over the two watercolors, among other things. However, he did not sell them, but kept them as part of the remainder of his art trade, which later became the "Schwabing Art Trove". The sheets thus ended up in the Gurlitt estate and were discovered in Munich in 2012.

In 2014, the Foundation of the Kunstmuseum Bern became the sole heir to this collection, which attracted international attention. The research of the task force on "Dame in der Loge" and "Dompteuse" was actively continued. “We are extremely grateful to the Kunstmuseum Bern for taking this step. It is extraordinary that a museum spares no expense or effort to process the history of the works," said the heirs of Dr. Ismar Littmann and the granddaughter of Dr. Paul Schaefer commenting on the museum's own initiative.

However, the decades that have passed and the turmoil of war have left gaps in the records that can no longer be closed, even with the greatest care. In 2021, the museum decides, despite a history of loss that can no longer be reconstructed down to the last detail, to jointly hand over the two works of art by Otto Dix to the heirs of Dr. Ismar Littmann and the granddaughter of Dr. Paul Schaefer - thereby setting new standards for a proactive and responsible handling of art looted by the Nazis. [MvL/SvdL/AT]
More Information
+
Sell
Get a free appraisal for a similar object!
+
Register for
Otto Dix
+
Buying from A-Z
+
Contact a specialist
+
Otto Dix Biography
Share