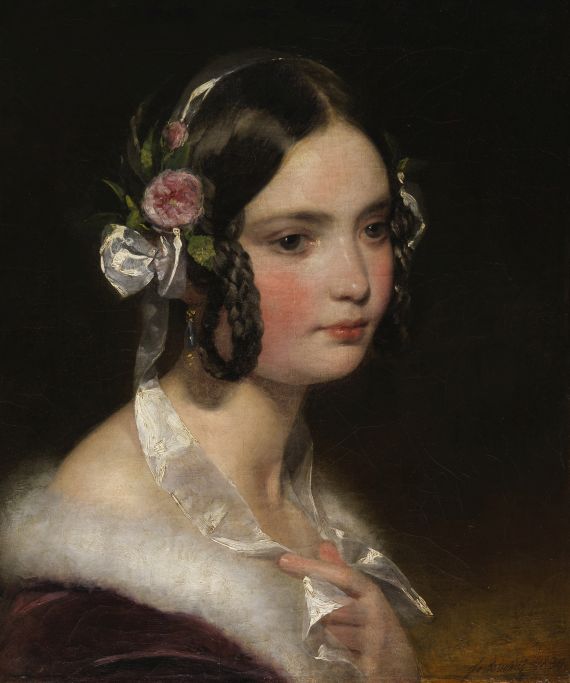 • Next to Waldmüller, Amerling was one of the most virtuoso portraitists of the Viennese society.
• His depictions were formative for the romatic ideal of beauty typical of the Biedermeier era
• His portraits are in the Bavarian State Painting Collections, Munich, the Belvedere and the Kunsthistorisches Museum, Vienna and the Alte Nationalgalerie, Berlin.

Together with Ferdinand von Waldmüller, Friedrich von Amerling is one of the most eminent portrait painters of the Austrian Hapsburg Empire. Beginning his education in 1815 at the Academy of Arts in Vienna, he subsequently spent several years at the Academy in Prague. His educational journeys took him to London, Paris and Rome, where he studied the art of prominent masters of the school, such as Thomas Lawrence and Horace Vernet, as well as studying the ancient world, which was an essential part of the artistic curriculum at the time. In the course of his life, his extensive travels also took him to Spain, England, Greece, Scandinavia, the North Cape and eventually, in 1886, to Egypt and Palestine. Shortly before he created the portrait on offer here, von Amerling traveled to Italy, the Netherlands and, in 1839, to Munich. At this time, he was already one of the most sought-after portraitists for the upper middle classes and the high nobility; one of his greatest works is the portrait of Franz I in imperial regalia (1821, Kunsthistorisches Museum, Vienna), which occupies a unique place in his oeuvre thanks to the subject’s unusually lifelike pose and the accurately rendered materiality of the robe and the jewelry-adorned imperial insignia. “Girl with Straw Hat” (1835, The Princely Collection, Liechtenstein, Vaduz/Vienna), the most expensive von Amerling painting sold at auction to date, is among the portraits of unknown beauties. Beautiful women from the world of music and theater, who lent him their faces for type portraits such as the “Oriental Woman” or the “Lute Player” (1828, Belvedere, Vienna), often served as models for his portraits. This portrait of a young girl, whose physiognomy is eminently representative of the innocent gentleness of von Amerling’s preferred type of woman, displays the same technical sophistication of detail, from the shiny silk ribbons and the delicate roses in the braided hair to the transparent shimmering porcelain complexion and rosy cheeks and the dark red velvet dress with the puffy fur collar. The dark background accentuates the effect of a meticulously rendered materiality and the impact of the light effects, which von Amerling employs to create the archetype of a naïve, untouched young beauty, portrayed with a romantic, slightly absent-minded gaze. [KT]
More Information
+
Sell
Get a free appraisal for a similar object!
+
Register for
Friedrich von Amerling
+
Buying from A-Z
+
Contact a specialist
Share