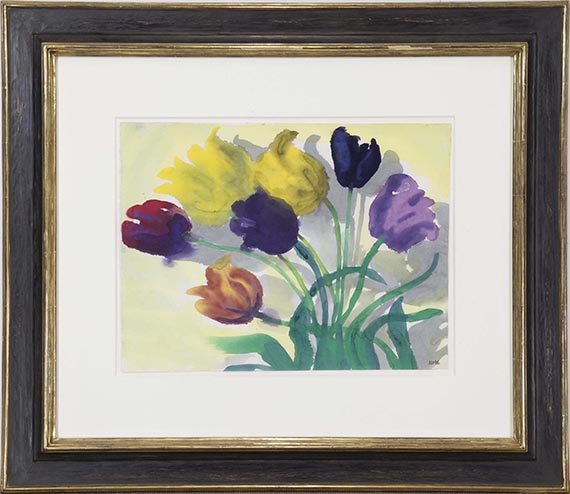 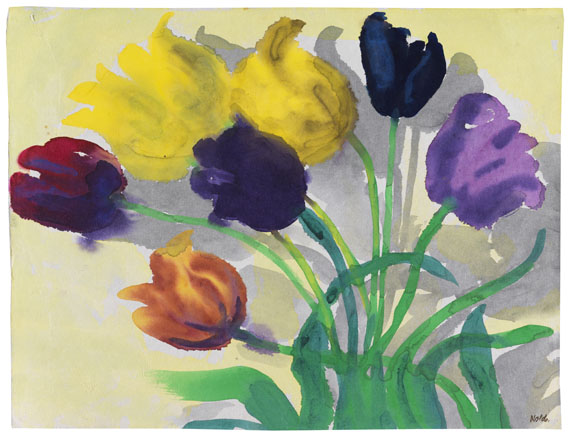 
• Airy and fascinating composition in subtly balanced colors.
• Emil Nolde is considered one of the 20th century's greatest watercolorists.
• His flower arrangements are among the most sought-after subjects in his œuvre.

The basis for Emil Nolde's love of flora and fauna can be found in his childhood as the son of a north German farmer. From early on he helped his mother in the garden and made first attempts at painting flowers and gardens. After an apprenticeship as a furniture draftsman and wood carver in Flensburg from 1884 to 1888, he moved to St. Gallen for an apprenticeship in industrial drawing. Although the Swiss mountain landscape differs greatly from the lowlands of the German-Danish border area, Nolde's closeness to nature remained unmistakable in his landscape watercolors and the depictions of local farmers. Despite rejection from the academy, he remained true to his decision to establish himself as a painter and attained his own style through Adolf Hölzel's private painting school in Dachau, the Académie Julien in Paris at the turn of the century and his experiences in Berlin's big city life. After spending several summers on the island of Föhr, the landscape became increasingly important in his oeuvre as of 1916, especially after he had acquired the plot in Seebüll in North Frisian in 1927, where he and his wife Ada would settle for good. Henceforth still lifes of flowers occupied a special rank. While he tried to capture a seemingly endless abundance of blossoms in oil on canvas in his early flower paintings, his later watercolors appear as true witnesses of nature. Most of the time he works were executed in his typical technique of wet-in-wet painting right in the middle of his own garden in Seebüll. The layout of his garden was particularly important to him, he rejected the first drafts and came up with the idea of creating the new garden from his wife’s and his initials, A and E, connected by a small water feature. This testifies to the deep meaning of the garden, especially as an inexhaustible source of inspiration. The tulip arrangement is also characterized by a balanced and cheerful color composition. Radiant and in a virtuoso composed confusion, they stretch their heads into the sunny yellow background and cast their shadows. The spontaneous impression of a spring day in Seebüll can also be experienced by the viewer. Nolde's love of nature, which should accompany him throughout his life, finds expression in the present work. [AW]
More Information
+
Sell
Get a free appraisal for a similar object!
+
Register for
Emil Nolde
+
Buying from A-Z
+
Contact a specialist
+
Emil Nolde Biography
Share