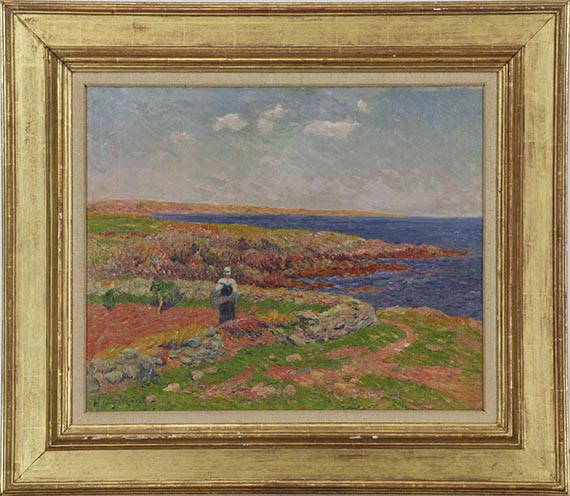 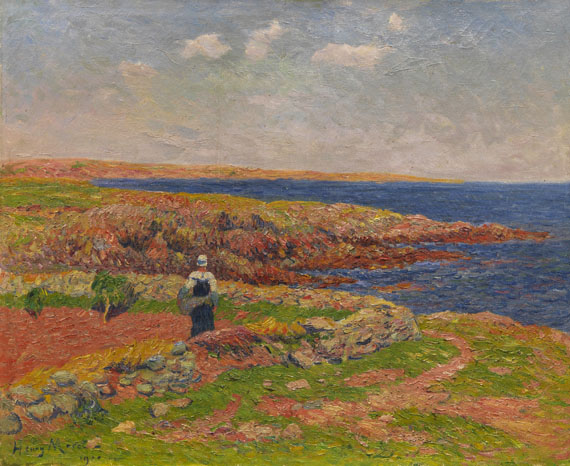 • Luminous coastal landscape influenced by avant-garde principles of Neo-Impressionism
• Moret spent the summers from 1880 in Brittany and joined Gauguin and the Pont-Aven School
• The important gallery owner of Impressionism, Paul Durand-Ruel concluded an exclusive contract with him
• Moret's Breton landscapes are in major international collections, including the Hermitage, Saint Petersburg, the Boston Museum of Art, the National Gallery, Washington and the Musée d'Orsay, Paris.

Accompanied by a confirmation of authenticity from Mr Jean-Yves Rolland, Paris.
The work will be included into the forthcoming catalogue raisonné Henri Moret.

Towards the end of the 19th century, the remote, unspoiled and wildly romantic region of Brittany became part of the motif repertoire of artists who sought to distance themselves from the academic Salon scene. Aside from classic landscape motifs, the region offered new, hitherto unexplored views of rugged, unspoiled nature along with ambient light and weather, not to mention the generally lower cost of living compared to the capital, Paris. Having moved to the small fishing village of Pont-Aven in 1886, it was Paul Gauguin who brought this secluded region to the attention of the avant-garde circles. Prior to this, Moret had completed his military service in Brittany and gone on to study at the Paris Academy and the studios of the eminent historical Salon painters Jean-Léon Gérôme and Jean-Paul Laurens. The Salon des Artistes Français accepted his first landscape painting with a Breton coastal motif in 1880. Upon his return to Brittany in the following year, Moret settled in Le Pouldu and devoted himself almost exclusively to this region. When Gauguin and some of his students spent the summer in Pont-Aven in 1888, he joined the group. In 1894, he settled permanently in Doëlan to devote his time to painting, while others returned to Paris. A permanent contract with the leading Impressionist gallery owner, Paul Durand-Ruel, provided Moret with financial security. The resulting work is both self-contained and prismatically luminous in its color expression. His subjects include Breton women gathering seaweed, fishing boats and rugged cliffs overlooking the wildness and expanse of the Atlantic Ocean, motifs that Gauguin also tackled. Moret’s paintings often explore the Finistère region at the far edge of the country, focusing on motifs from Moëlan and Pont-Aven to Belon, Brigneau and Ouessant. Indebted to an Impressionist lightness of texture and the beginnings of Neo-Impressionist color fragmentation, Moret’s Breton coastal landscapes are of an arresting intensity, capturing the character of this singular region with a unique skill. Thanks to Durand-Ruel, Moret’s works were included in prestigious collections, among them the Hermitage, St. Petersburg, the Boston Museum of Art, the National Gallery, Washington, and the Musée d’Orsay, Paris. [KT]
More Information
+
Sell
Get a free appraisal for a similar object!
+
Register for
Henry Moret
+
Buying from A-Z
+
Contact a specialist
Share