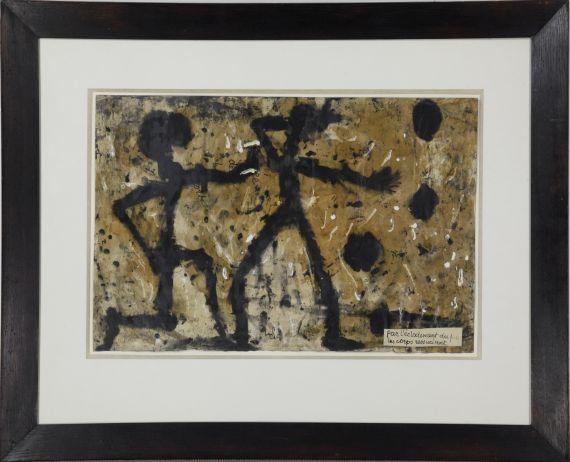 "I am determined to paint and to suffer!!"
Louis Soutter to his fellow painter Marcel Poncet in 1937.

"You can draw, which offers you the wonderful opportunity to depict what moves you deep inside. [..] In Paris and America you are surrounded by friends and admirers. [..] I often talk about you in awe. [..] Draw, Louis, as that is true happiness. And confide in me, your friend Le Corbusier."
Le Corbusier to Soutter, September 1936.

Louis Soutter - Art-historical Rediscovery of a Spectacular Oeuvre
Misjudged, lonely and forgotten: Soutter's tragic life is a captivating and disturbing testimony to failure. After promising beginnings, the artist, who was born as the second child of an upper-class Swiss family of pharmacists, was soon regarded an eccentric unable to meet the demands of an educated middle-class existence. Soutter's painterly oeuvre is unconventional in every respect. It was created in the total seclusion of his room in the special-care home in Ballaigues, where he lived until his death after he had been deprived of the right of decision by his family. Today his revolutionary works that defies any traditions, are attributed to early Art But and are hotly contested on the international auction market. Before that, his work had been forgotten for a long time, until it was gradually rediscovered and celebrated by art history in the course of large solo exhibitions at, among others, the Lenbachhaus Munich (1985) and at the Kunstmuseum Basel (2002). His energetic psychogrammatic pictorial inventions fascinate and captivate, they negate any art-historical tradition and overwhelm our viewing habits.

Misjudged, Lonely and Forgotten: Soutter's Life as a Record of Failure.
The son of a pharmacist and a musician, Soutter grew up in Morges, Switzerland, in a wealthy, educated family. Soutter's mother was the great-aunt of the famous architect Charles Edouard Jeanneret, known as Le Corbusier. Prosperity opened up opportunities for experimentation: Soutter first began to study engineering, then switched to architecture, which he also gave up, in order to devote himself to the violin. At the age of 21, he became a student of Eugène Ysaÿe, professor at the Royal Conservatory in Brussels, a violin virtuoso and composer. Ysaÿe was an important, positive figure in Soutter's life, who supported his exceptional musical and artistic talent. From then on he encouraged his student to pursue painting, his second love. Soutter soon gave up his music studies and returned to Switzerland to attend various art and painting classes, first in Lausanne and later in Paris. In 1897, Soutter finally emigrated to Colorado Springs with the rich and charming American violinist Magde Fursman, whom he had met in Brussels and who would soon become his wife. In th USA he became head of the newly founded Art Department at Colorado College. But this supposedly stable moment in Soutter's life only lasted for a short time. The positive stretch quickly ended, and a history of private and professional failure became manifest: in 1903 he got divorced and stepped down as college manager. Soutter returned to Switzerland a broken man. Initially, he still had a position as violinist in the symphony orchestras of Lausanne and Geneva. However, the eccentric dandy soon had to survive on odd jobs and increasingly lived at the expense of his family. The beginning of a story of decline. Physically exhausted and mentally shattered, the stubborn loner lived well beyond his means and was put under guardianship by his family and admitted to a Swiss nursing home. Soutter spent 19 years completely cut off from the outside world in the closed ward of the authoritarian home in Ballaigues. Even deprived of his violin, he brought his very own artistic fantasy world to life in the seclusion of his room.
Escape into Imagination - Soutter's Pictorial Psychograms
In the first creative period he filled notebooks with scores of drawings in absolute solitude. In manic obsession. he made an attempt to get his mental anguish off his chest. It was only through his cousin Le Corbusier, who first visited him in Ballaigues in 1927 and who was fascinated by his drawings, that Soutter gained access to suitable painting materials such as large-format paper, charcoal, ink and gouache. Nevertheless, black continued to dominate his works from then on. No other work could be more characteristic of Soutter's oeuvre than the present two-page composition "Par l'éclatement du feu les corps réssucitent / Tête de face". On the one side it shows his mysterious, shadowy world of black figures, while the other side confronts us with a grotesquely overdrawn head with empty eye sockets and a desperately gaping mouth from the infinite depths of black. Soutter's work, which piled up almost in its entirety in his small nursing home room after his death in 1942, is not only a progressive artistic parallel world in terms of its motifs, but also documents an important step in his technical development: In 1937, Soutter began to paint with his fingers, thereby adopting a technical accomplishment of later Performance Art for his artistic creation. From then on he painted not only in charcoal, but also used ink and gouache with his hands and fingernails, as is the case in "Par l´éclatement du feu les corps réssucitent", thus adding a completely unhindered energetic expression to his works.

Soutter's "Shadow Figures" - Revolutionary Imagery of a Prisoner
If we become aware of how revolutionary and disturbing these pictorial inventions must have been for the contemporary viewer, for whom the later creations of Nitsch, Pollock, Penck or Dubuffet (fig.) were still inconceivable, one gets the impression of being confronted with the psychographic imagery of an unrecognized genius. Especially Soutter's black figures with their overlong limbs, which he lets vaguely wander about the flat, abstract pictorial ground in enigmatic movements, appear like the shadowy figures from Plato's Parable of the Cave, which make the prisoners in the cave believe they were their real world. Unlike Plato's ignoramuses, who have not yet known any other existence, Soutter did know life outside the cave, but was condemned to a cave existence and had begun to create his very own reality in total seclusion with the help of his artistic imagination. Physically restricted, Soutter achieved a mental liberation and rapture with the help of art, by means of which he was able to process the physical and mental suffering of imprisonment and isolation. With this in mind, the present composition entitled "Par l´éclatement du feu les corps réssucitent (By the outbreak of fire, the bodies are reborn)" appears like a kind of key work in Soutter's fascinating oeuvre.

In 2021 , the writer Lukas Hartmann dedicated a remarkable biographical novel to the impressive life of Louis Soutter. In "Schattentanz. Die Wege des Louis Soutter" he introduces a wider public to the fascination for this unrecognized artist and his long-unknown work. The novel is part of an art-historical rediscovery that began in 2002 with the Soutter retrospective exhibition at the Kunstmuseum Basel. During Soutter's lifetime, only his famous cousin, the architect Le Corbusier, attributed outstanding artistic importance to the unconventional work of his incapacitated cousin.

Today, Soutter's large-format paper paintings, which are extremely rare on the international art market, are his most sought-after creations. We are all the more pleased to be able to present one of the few double-sided works by this visionary artist on the international auction market for the first time with the present "Par l´éclatement du feu les corps réssucitent", which has been part of a German private collection for more than 30 years.

Louis Soutter - Unrecognized Genius
Soutter's life is not only the story of a stubborn loner unable to meet the demands of an educated middle-class existence and ultimately doomed to fail, due to his non-conformity with bourgeois society, it also testifies to the failure of a society unable to deal with a difficult artist personality. The Swiss conductor Heinz Hollinger once mentioned that Soutter was kicked out of the symphony orchestra for misconduct, because he often raised objections. In Holliger's eyes, however, Soutter was the greatest genius ever on this orchestra and that the suggestions of this "great visionary" should have been taken seriously (quoted from: https://ultraschallberlin.de/das-groesste-genie-das-je-in-diesem-orchester-sass-heinz-holliger-ueber-louis-soutter/
ger-about-louis-soutter/). Holliger also emphasized that Soutter was "never diagnosed mentally ill by any doctor", he just "ordered twenty silk ties and sent the bill to his brother." An amusing anecdote, as it could also have come from later artists who challenged and overwhelmed society with their personality and art, such as Martin Kippenberger, Jonathan Meese or Andy Warhol. Accordingly, the story of Soutter's tragic life is ultimately also the story of the failure of bourgeois society to accept and perhaps even appreciate an unconventional and visionary spirit unwilling to adapt. But despite all the tragedy, the painful experience of being unfit for life, of being imprisoned and excluded is perhaps what gives the works Soutter created in the Ballaigues home an aura that remains inimitable to this day. [JS]
More Information
+
Bidding Options
+
Bid by telephon / written
+
Contact a specialist
+
Buying from A-Z
+
Preview & Auction Procedure
+
Catalogue Order
+
Register for
Louis Soutter
+
Sell
Get a free appraisal for a similar object!
Share 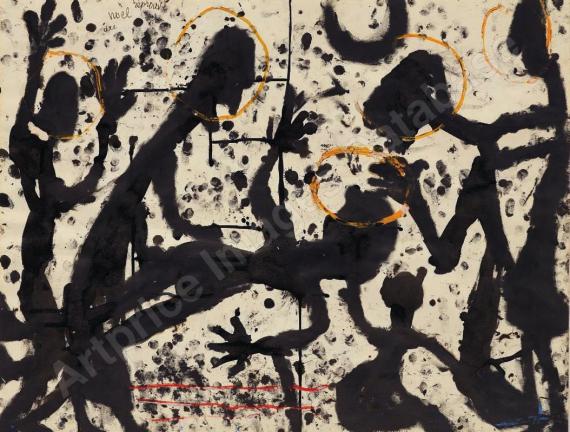