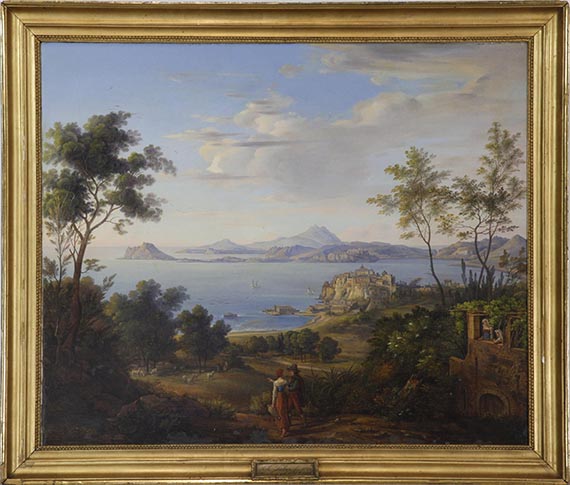 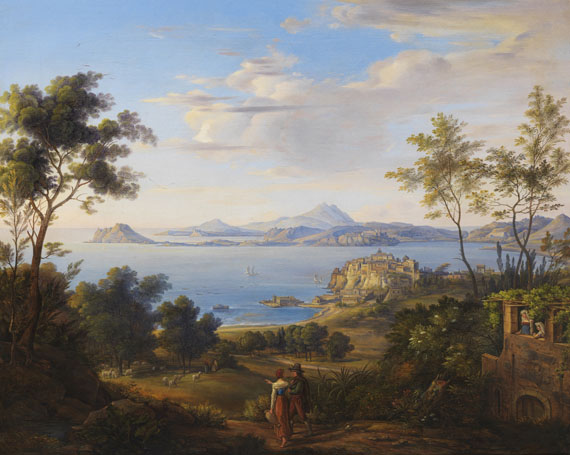 • Faber's landscapes are among the finest and most atmospheric works of the romantic picture of Italy.
• The view over the Bay of Naples is the key motif of the early 19th century longing for Italy
• Today, Faber's landscpaes are in many important collections of 19th Century Art, among them the Kunsthalle Hamburg and the Alte Nationalgalerie, Berlin.

Having completed his first apprenticeship with Carl Waagen in Hamburg, Johann Joachim Faber spent time in Dresden, Prague and Vienna before moving to Rome for two years in 1806. He was based in Hamburg from 1808-1816 and spent the next eleven years in Rome alongside other significant landscape artists, such as Joseph Anton Koch and Johann Christian Reinhart. The Bay of Pozzuoli is a perfect example of the enthusiasm for nature typical of the Romantic period, which inspired artists to create intense portrayals of real-life landscapes, detailed plant studies and ambient weather observations. In Faber’s painting, this enthusiasm for nature combines with the classicistic-idealistic compositional schemes that continued to prevail at the time and still retained traces of the great French master of 17th-century landscape painting, Claude Lorrain, who worked almost exclusively in Rome. In the soft evening light, the scene stretches out into the distance between the delicate trees drawn in elegant lines on the left and right. The pastoral middle ground of the painting is dominated by a woman fetching water who points out the way to a man with a pilgrim’s hat, looking out over the peaceful bay beyond the town of Pozzuoli. Capo Miseno rises in the calm sea, with the islands of Procida and Ischia visible behind, just off the coast. Faber took a special interest in the portrayal of cloud phenomena which, in contrast to the ideal-typical scenery, display a certain element of realism. Epitomizing a widespread passion for Italy, the Bay of Naples south of Rome, which could be reached by carriage in two days, had a special reputation as an idyllic paradise. On his arrival one spring, Johann Wolfgang von Goethe wrote: “Naples is a Paradise: everyone lives in a state of intoxicated self-forgetfulness, myself included. I seem to be a completely different person whom I hardly recognize.” (Goethe, Italian Journey, on March 16, 1787, quoted from Frank Büttner, Herbert Rott (eds.), Kennst du das Land.. Italienbilder der Goethezeit, exhibition catalog, New Pinakothek, Munich, Munich 2005, p. 236). Faber’s painting reveals the longing for an all-embracing harmony between man, nature, light and air that made Italy an inspiring place of pilgrimage for artists of various genres well into the 19th century. [KT]
More Information
+
Sell
Get a free appraisal for a similar object!
+
Register for
Johann Joachim Faber
+
Buying from A-Z
+
Contact a specialist
Share