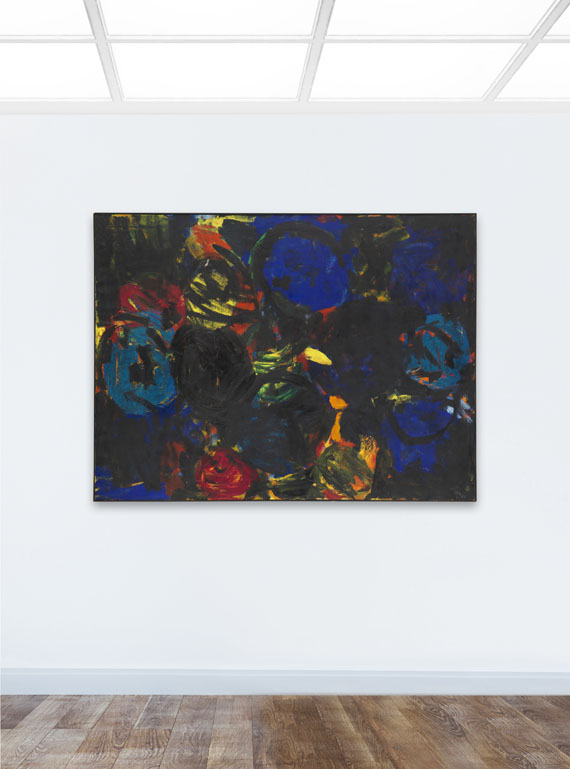 • Monumental work with particularly strong contrasts from the significant period of the "Disk Pictures" (1954-1962).
• Nay showed a "Disk Picture" in the exhibition "German Art of the Twentieth Century" at the Museum of Modern Art, New York in 1957.
• One year after it was made, it was shown as a key work in the grand retrospective exhibition at the Folkwang Museum, Essen.
• As of 1962 part of the Egon Eiermann Collection, world-famous architect and furniture designer .

PROVENANCE: Galerie Günther Franke, Munich (with the gallery label on the stretcher).
Prof. Egon Eiermann Collection (1904-1970), Karlsruhe/Baden-Baden (acquired from the above in 1962, until 1970, with an inscription on the stretcher, as well as with a label incribed by hand).
Bavarian private collection.

Following the period of the “Rhythmische Bilder” (Rhythmic Pictures) in the early 1950s, E. W. Nay was intensively occupied with the "Scheibenbilder” (Disk Pictures) from 1954 into the early 1960s, of which the present work is a prime example. The works belong to E. W. Nay's most important and longest consistent creative period (1954-1962), and helped the artist to great success both in Germany and abroad.
In earlier works, the disks still had graphic elements attached to them, but as of 1955 Nay liberated them from all edgy and angular shapes and made the disk the sole motif. In the introductory text of the catalogue raisonné of oil paintings, Siegfried Gohr, former director of the Museum Ludwig in Cologne, compares this creative period with a "walking-tour through the color circle", because Nay uses the circular and semicircular forms as color carriers with a by then unparalleled chromatic freedom, put together to form the most diverse but always harmonious compositions (exhibition cat. E. W. Nay. Retrospektive, Cologne 1990, p. 21).

Darkness and Luminosity of Colors
In the present work from 1961, Nay uses the effectiveness of the primary colors yellow, red and blue and thus creates both a light-dark and a warm-cold contrast that organizes the pictorial structure. The color is not forced into a specific form by following any art-historical constraints, no formal rules or artistic schemes – instead the color is allowed to speak for itself in freely set circles, semicircles, gestural lines and free areas of varying sizes. Nay niftily breaks through the darkness of the black in this particularly dynamic composition by means of saturated color fields placed above and next to one another, the complexity of which also adds a certain depth to the depiction. The artist boldly places an impasto, yellow color accent over the dark, black surface. Bright, radiant blue, deep red and sunny yellow are overlaid by energetic, gestural brushstrokes - the passionate, dynamic work of the artist can be experienced in every corner of the painting.

The architect Egon Eiermann (1904–1970)
In the 1960s, the impressive work became part of the collection of the architect and furniture designer Egon Eiermann. Eiermann maintained friendly contacts with E. W. Nay, especially in later years, but also with other well-known artists, composers, architects and designers such as Walter Gropius, Ludwig Mies van der Rohe and Marcel Breuer. Eiermann's creation, his slender, subtly balanced metal and glass constructions, the strict forms of his clear, cubic, at times asymmetrical designs, made him both one of the main protagonists of a steel and glass architecture coined by Mies van der Rohe and an uncompromising representative of modern architecture. Like the work of E. W. Nay, Eiermann's architectural designs were also very successful, especially after the Second World War. In the 1940s, he was involved in reestablishing the Deutsche Werkbund, teaching assignments also brought him to the technical universities of Darmstadt, Weimar, Berlin, Hanover and Karlsruhe, where he taught architecture as of 1947. In 1953 he received the Good Design Award from the Museum of Modern Art in New York. In the 1960s he contributed to, among other things, the German embassy in Washington, D.C. and the Kaiser Wilhelm Memorial Church in Berlin. He was a member of juries and planning councils for the new buildings of the German Bundestag and the Bundesrat in Bonn, as well as for the Olympic buildings in Munich. Eiermann is best known for his steel-tube chairs, folding chairs, tables, wicker furniture and everyday objects, that were influenced by Ray and Charles Eames from the 1920s onwards. Today they are regarded absolute design classics. His consistently modern view of form and proportion, and the development of his own architectural language certainly explains the close friendship with E. W. Nay, who played a likewise significant role in the second half of the 20th century. [CH]
More Information
+
Sell
Get a free appraisal for a similar object!
+
Register for
Ernst Wilhelm Nay
+
Buying from A-Z
+
Contact a specialist
+
Ernst Wilhelm Nay Biography
Share