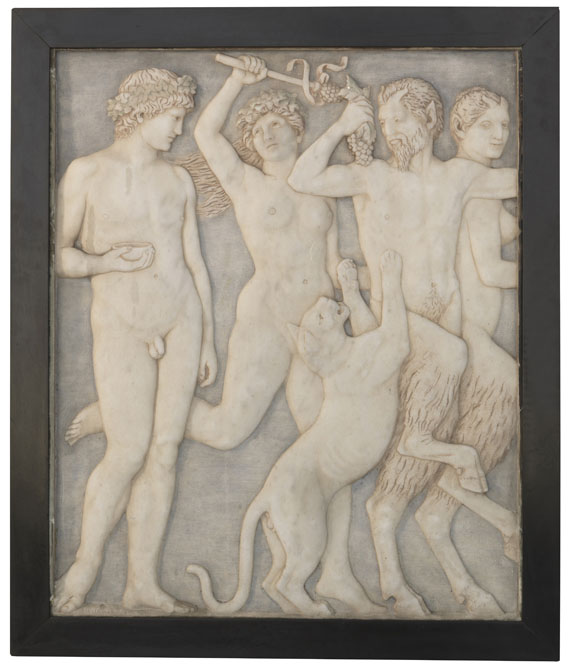 • Volkmann was master student of Hans von Marées and expressed his ideals in sculpting
• He was one of the first German sculptors to make polychrome works
• Volkmann unites in neo-classicist style with moved expression in this relief with great mastery
• Reference to the philosophy of Friedrich Nietzsche (1844-1900) between Apollinian and Dionysian.

We are grateful to Dr. Anette Niethammer, Mötzingen, for her kind expert advice.

Artur Volkmann studied sculpture in Dresden and Berlin from 1873. From 1876, a two-year scholarship enabled him to stay in Rome, which he made his home for the following decades. There he made the acquaintance of the painter Hans von Marées, who had a significant artistic influence on him and who later designed the relief for his grave on the Roman ‘cimiterio accatolico‘. Solely for financial reasons, Volkmann kept coming back to Germany to secure new orders. In dialogue with antiquity, its "noble simplicity and quiet grandeur", sculptures of ancient figures such as Bacchus, Psyche, Aphrodite were created, which are committed to a new classicism in the simplification of form and emphasis on the line, but also try to express a certain naturalness without any idealization. As early as in 1882, Volkmann, as one of the first sculptors in the 19th century, began to color his marble works and took an active part in the discussion about colored sculpture that was beginning in Germany at the time. This subject of polychromatic treatment became known to the general public primarily through the classic archaeologist and director of the Dresden sculpture collection, Georg Treu. The ideal of depictions in pure white marble, familiar from classicist art, was exchanged with colored versions to attain a greater liveliness. Volkmann was convinced of the historically authentic practice of coloring his sculptures, even when ignorant clients demanded the paint be washed off and threatened not to pay otherwise. The depicted bacchanalian scene, in which the figures line up next to each other, is also influenced by Marée's pictorial conception. On the left side, the slender young man, holding the wine bowl calmly and elegantly in ideal contrapposto, forms a contrast to the wild, intoxicated movements of the maenad waving the thyrsos staff and the panther next to the satyr couple. Volkmann shows his mastery of the ancient iconology of Dionysian cults - certainly also due to his interest in the Nietzschean dualism of the Apollonian and Dionysian, the human disposition between reason and intoxication. The fine, more linear than sculptural design of the multi-figure composition with the delicately colored background, make the relief a special work in Volkmann's oeuvre. [KT]
More Information
+
Sell
Get a free appraisal for a similar object!
+
Register for
Artur Volkmann
+
Buying from A-Z
+
Contact a specialist
+
Artur Volkmann Biography
Share