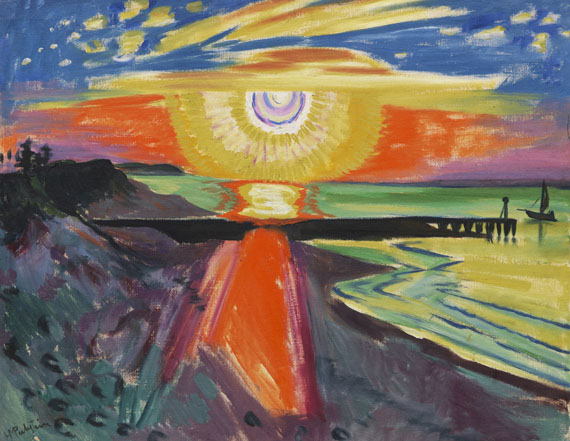 40
Hermann Max Pechstein
Sonnenuntergang an der See, 1921.
Oil on canvas
Estimate:
€ 250,000 / $ 235,000
Sold:
€ 462,500 / $ 434,750
(incl. surcharge)
Sonnenuntergang an der See. 1921.
Oil on canvas.
Soika 1921/6. Lower left signed. Verso signed, titled and inscribed "XI". 80 x 101 cm (31.4 x 39.7 in).
The artist's studio book mentions the painting for 1921 as "XI. Sonnenuntergang an der See".
• There is no other landscape painting that testifies so strongly to Pechstein's fascination for sun and sea.
• Such a luminous blaze of color is hard to find in Pechstein's œuvre.
• From the significant collection of the Berlin collector and Pechstein patron Carl Steinbart, which comprised 25 paintings, among them "Lotte mit Kopftuch" (1919) as well as works by Munch, Courbet and Slevogt.
• First painting of the beach in the coastal town of Leba, which would become an artistic place of longing for Pechstein.
• Dr. Roman Zieglgänsberger, curator of the department of Modern Art at the Museum Wiesbaden, has made a loan request to include this painting into the exhibition "Max Pechstein – Die Sonne in Schwarzweiß“ planned for 2024.

LITERATURE: Stuttgarter Kunstkabinett Roman Norbert Ketterer, 33rd auction, Modern Art, May 30, 1959, lot 728, with a black-and-white illu., plate 71 (with the label on the reverse).

When Pechstein painted landscapes, he was inpired by the sun and the sea. He repeatedly traveled from Berlin to the sea, to Nida, Dangast, Palau, Monterosso al Mare, Positano and the Pomeranian towns of Leba and Rowe. It was the exuberant play of colors and forms that fascinated him, the cloud- and wave formations, as well as the changing times of the day, the weather and the light. The present "Sonnenuntergang an der See" (Sunset by the Sea) is certainly outstanding in terms of colors and composition, which Pechstein noted in his studio book as the eleventh work in 1921. It is a brilliant blaze of color that is extremely rare in Pechstein's oeuvre, only his paintings of the South Seas show the colors in a comparable intensity.

Accordingly, it is little surprising that the present painting comes from the important collection of Carl Steinbart (1852-1923). Steinbart (fig.) was general manager at Bankhaus Mendelsohn & Co in Berlin. He amassed not only a collection of more than sixty paintings by Max Slevogt, but also a considerable array of expressionist art, including numerous works by Pechstein" (Soika, vol. 1, p. 125). One of the earliest works in his collection supposedly even was a version of the motif "The Wave" by Gustave Courbet. A total of 25 Pechstein paintings, including "Lotte mit Kopftuch" (Soika 1920/43) (fig.), were in Steinbart's collection, the earliest acquisitions were made in 1917. In 1918 the latest, Pechstein and Steinbart must have met in person in context of a commission for a portrait of his daughter Dora ("Die chinesische Jacke", Soika 1918/44). Steinbart also collected Edvard Munch, who made two portraits of his daughter Irmgard. For the years 1919 and 1920, the friendly contact between Pechstein and Steinbart is documented in a series of postcards and letters from the artist to his "esteemed patron". In May 1919, Pechstein sent a self-portrait inscribed "Dear Mr. C. Steinbart, here you see me with a swollen cheek I got from a mosquito, it is not pleasant, but looks damn good" (quoted from: Soika, vol. 1. p. 124). (Fig.) After Steinbart's death in October 1923, the collection was divided and passed on to his three daughters, Dora, Irmgard and Eva. Among other things, Eva received our "Sonnenuntergang an der See".

It is the first painting in which Pechstein captured the beach of the Pomeranian coastal town of Leba, where he first arrived together with Lotte and the eight-year-old Frank by train from Berlin on the evening of May 3, 1921. Pechstein was particularly enthusiastic about the constant changes he observed in nature, the changing times of the day and the seasons: "Nature has now changed for the third time, and in autumn, when it changes for the fourth time, I have to part" (H. M. Pechstein 1921, quoted from: Soika, vol. 1, p. 73). From then on, however, Pechstein would regularly spent the summer in his artistic place of longing, which would become his second home until 1945. [JS]
More Information
+
Sell
Get a free appraisal for a similar object!
+
Register for
Hermann Max Pechstein
+
Buying from A-Z
+
Contact a specialist
+
Hermann Max Pechstein Biography
Share