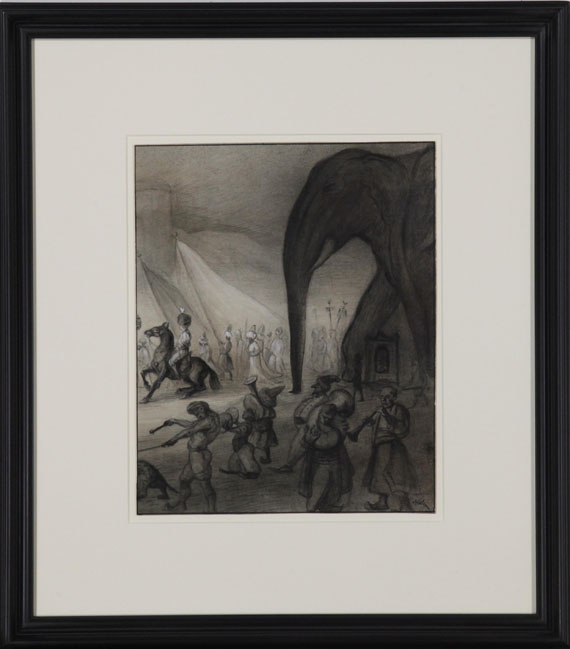 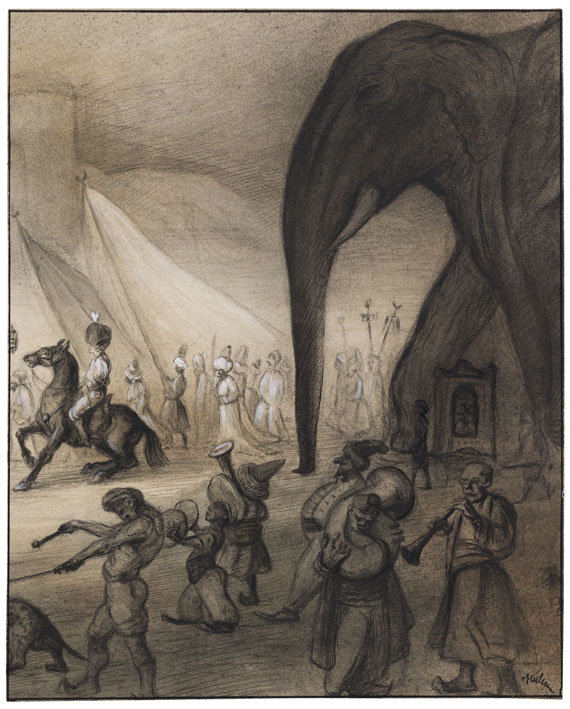 We are grateful to Dr. Annegret Hoberg, former director of the Kubin Archive at the Lenbachhaus, Munich, for her kind expert advice.

"The right observer, as I would like him to be, would not only enjoy or critically look at my sheets, but, as if stimulated by a secret touch, would also have to turn his attention to the darkroom of his own dreamy consciousness."
Alfred Kubin, on the occasion of the opening of a Kubin exhibition, 1927, quoted from: Ulrich Riemerschmidt, Alfred Kubin. Aus meiner Werkstatt, Munich 1973, p. 26.

Kubin, especially in his early creative period, was an obsessed drawer of uniquely symbolic, fantastic dream worlds. In his masterfully composed drawings, he often created menacingly fascinating nightmare scenarios or unleashed sexual fantasies in which we encounter fantastic creatures, symbioses of humans and animals in surreal landscapes. In addition to these dark fantasies, Kubin was also obsessed with less menacing fairytale worlds and showed an enthusiasm for the oriental world, to which the present drawing from his early creative period testifies. Kubin's captivating graphic oeuvre remained consistently figurative, but by no means realistic; it is always entirely the product of numerous sources of inspiration from literature coupled with an exuberant artistic imagination. In a letter dated June 14, 1911, Wassily Kandinsky, among others, described the melancholic and unstable disposition of the soul as fundamental to Kubin's unique symbolistic-visionary creativity: "Dear Kubin! [..] Please try hard to get rid of the dark thoughts, to bring them down. After all, you are a person of fine feelings, subtle sensitivity. [..] I am very grateful for the copy of the night pieces. You know how much I love your things. [..] Yours Kandinsky." (quoted from: Paul Raabe (compiled on behalf of Dr. Kurt Otte, Kubin Archive Hamburg), Alfred Kubin. Leben – Werk – Wirkung, Hamburg 1957, p. 36/37). Far in advance of Kubin's later drawings for the illustrated edition of Wilhelm Hauff's oriental fairy tales published in 1911, the artist created an "Orientalische Phantasie" (Oriental Fantasy) in the present sheet, which is not only inspiring for its exotic motifs like the elephant striding into the picture from the right, but also casts a spell over us because of Kubin's almost unsurpassed graphic mastery. It is a dreamy parallel world, which, also in this sheet – albeit only subtly – contains dark fantasies and thoughts: be it the unrealistically large and menacing elephant depicted in the picture, with the load carriers beneath it that barely reach to the tip of the trunk, or the rider in the background, who accompanies the procession of turbaned men and, as an Ottoman rider, conjures up thoughts of a historical menace. Born in Bohemia and living in Austria from 1906, the image of an oriental caravan was inevitably associated with the historical siege and the devastating armed conflict of the Ottoman Wars, which has remained part of the collective memory in the countries of the former Austro-Hungarian monarchy well into the 20th century. [JS]
More Information
+
Sell
Get a free appraisal for a similar object!
+
Register for
Alfred Kubin
+
Buying from A-Z
+
Contact a specialist
+
Alfred Kubin Biography
Share