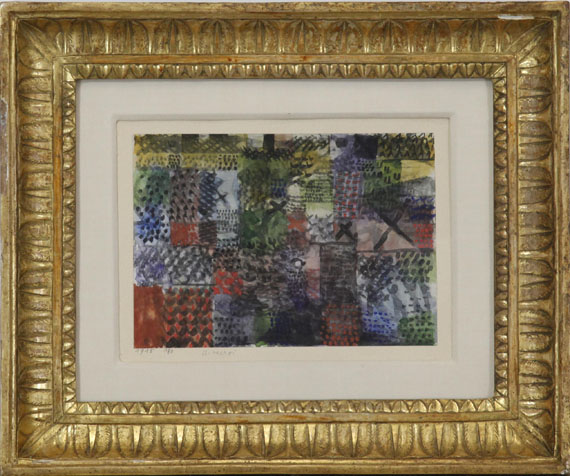 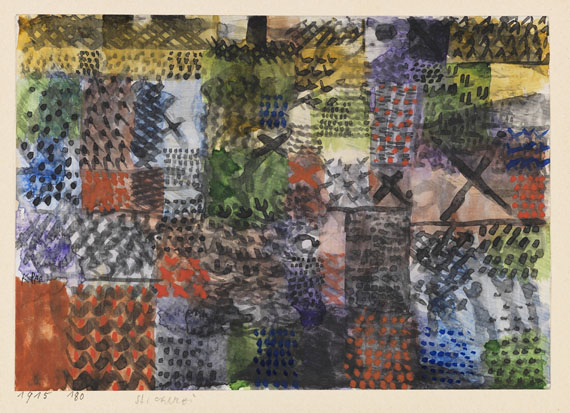 • Made between the trip to Tunisia and the Bauhaus.
• It was during this decisive creative period that Klee would attain his signature style: The poetic play of fine lines in front of a backdrop of luminous colors.
• Shown at the comprehensive retrospective exhibition at the Kronprinzenpalais in Berlin in 1923.
• Similar works are in possession of, among others, the Metropolitan Museum of Art and the Museum of Modern Art, New York, and the Paul Klee Foundation at the Kunstmuseum Bern.

The trip to Tunisia he made with his two fellow painters August Macke and Louis Moilliet in April 1914 was a key experience in Paul Klee's artistic development. Fascinated by the clarity of the southern light and the cubic forms of oriental architecture, Klee's painting underwent a spectacular liberation of form and color in the watercolors he made thereafter. Although young Klee had already received important suggestions in context of his examination of Cézanne, Matisse and Delaunay, as well as from the painters of the "Blauer Reiter" in previous years, Klee would only finally attain his unmistakable style through the oriental impressions gained in Tunisia. The fact that not only art historical research, but not least the painter himself perceived it this way, is proven by a famous entry in Klee journal, writing from Kairouan on April 15, 1914: "That is the meaning of this happy hour: Color and I are one. I am a painter." (quoted from: Paul Klee. His Life – His Art, Munich/London/New York 2011, p. 86). Klee's creation impressively demonstrates why the journey to Tunisia is considered pivotal in modernism, as it marked the overcoming of German Expressionism and the dawn of an increasingly new abstract painting. Inspired by the new impressions, Klee boarded the steamer for Palermo on April 19, 1914 and traveled back to Munich via Bern. World War I broke out just three months later. Klee was drafted in March 1916, but was not sent to the front. Owing to the good contacts he had, he was send to Schleißheim near Munich for aircraft maintenance tasks. It was not until after the war end of the war that he made paintings again, as watercolor had been Klee's preferred means of artistic expression until then. As in the two very similar watercolors "Schwere Pathos” (Heavy Pathos, 1915) (fig.) in the Metropolitan Museum, New York, and "Mit dem roten X” (With the Red X, 1914) in the Museum of Modern Art, New York, our composition is a fine early testimony to Klee’s decisive step towards an overlay of linear, symbolic structures against a background of fields of luminous colors. The sign of the cross was included in his watercolors as of 1914, and, as is the case in "Teppich der Erinnerung” (Carpet of Remembrance, 1914, Paul Klee Foundation, Bern) and "Stickerei” (Embroidery), ultimately became the picture’s defining symbol. Klee's colorful fields no longer permit figurative references to the impressions of oriental architecture he gained on the journey to Tunisia, instead they evolve into an abstract structure that derives its power solely from the pure form and the color effect. The fact that Klee used the inspiration he had found in oriental handicrafts, colorful carpets and wall hangings typical of Tunisia for his art-historically important step must be considered likely and was also formative for his later work at the Bauhaus, his lessons in "Formlehre” (Theory of Form) and his teaching activity in the weaving class. The present work is not only an interesting link between the journey to Tunisia and the Bauhaus, but also an early example of Klee's step towards abstraction and his characteristic, playful layering of linear, symbolic structures and a bright, two-dimensional coloring. The embroidered line structure in the foreground becomes increasingly finer, but from then on it remained a defining feature of Klee's painting, as exemplified by the beautiful composition "Florentinisches Villen Viertel" (Villas Florentine, 1926) (fig.) at the Centre Pompidou, Paris. [JS]
More Information
+
Sell
Get a free appraisal for a similar object!
+
Register for
Paul Klee
+
Buying from A-Z
+
Contact a specialist
+
Paul Klee Biography
Share