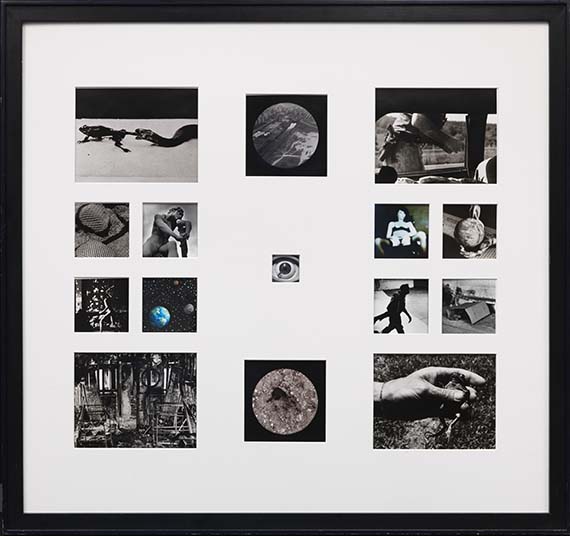 PROVENANCE: P·P·O·W Gallery, New York (with the gallery label on the reverse).
Private collection Southern Germany (acquired from the above in 1991).

“To me, photographs are like words and I generally will place many photographs together or print them one inside the other in order to construct a free-floating sentence that speaks about the world I witness.” ("Close to the Knives: A Memoir of Disintegration", 1991)

If we take to heart David Wojnarowicz’s above statement on the syntax of images, then "Weight of the Earth, Part II", is a very complex and lengthy “sentence.” Its constellation of unsettling and enigmatic pictures elicits a sense of wonder in the viewer, but also a feeling of anxiety, like when waking from a disturbing dream.

Wojnarowicz was a self-trained polymath who survived an unimaginably abusive childhood. He engaged in a tireless examination of the natural sciences, the dehumanizing threat of technology, and the systematic disempowerment of the vulnerable. Believing that the imagination was “one of the last frontiers of radical gesture,” he fought for visibility in an ossified “one-tribe nation” with an onslaught of paintings, photographs, films, performances, and writings.

A renegade photographer
According to the artist, his earliest experience as a photographer was in his mid-teens, while he was living on the streets of New York. With a stolen 35-millimeter camera and rolls of film pilfered from drug stores, he took hundreds of pictures of cruisers, hookers and drag queens hustling by the abandoned pier warehouses along the Hudson River. He then checked the undeveloped rolls and other belongings into coin-operated bus station lockers. As if by karma, he neglected to deposit the coins to reclaim them. All that remained were the uncaptured memories that found their way into his later work.

While working at an ad agency in 1978, at the age of 24, Wojnarowicz made a photostat blowup of the face of his hero, the French poet Arthur Rimbaud, to create a lifesize cardboard mask. His first serious photographic series, "Arthur Rimbaud in New York", 1978-79, consisted of 24 photographs he took of friends wearing the mask on the subway, in diners, at porn theatres, and other locations Wojnarowicz frequented. With few exceptions, he didn’t make photographic works again until 1988, shortly after his mentor and one-time lover Peter Hujar died. He took over the renowned photographer’s East Village loft, and for the first time he had full access to a darkroom. Between 1988 and 1990, he created "Weight of the Earth", the controversial “Sex Series,” and many of his other best-known photographs.

“An opera that could actually have hundreds of parts instead of just two.” (from an audio cassette, Fales Collection, NYC)
"Weight of the Earth, Part II", consists of fourteen photographs and one watercolor, ranging in size from about three-inches square to eight by eleven inches. They are arranged symmetrically around the tiny central photo, a closeup of a fire ant crawling on a wooden eyeball. "Weight of the Earth, Part I", in the collection of the Museum of Modern Art in New York, is formatted identically but with entirely different images. Wojnarowicz had a methodical approach to the composition of "Weight of the Earth" and other multi-image artworks. He worked from preparatory lists, diagrams, and sketches of potential images and their placement.

“The weight of the earth is about things in captivity: animals and people and all that surrounds us.”
Some of the photographs in "Weight of the Earth" enact a predator-and-prey scenario: the photo on the upper left of a snake about to swallow a toad is counterbalanced on the lower right with a detail of a hand grasping a captured toad. This pairing reflects Wojnarowicz’s regret about “the human irritation at the sight of uncontrolled ‘nature.’” Other photos address disenfranchisement and exploitation: in a blue-tinted still from a porn film an actress spreads her legs for the camera; a policeman with a gun in his holster, seen through the window of a car he has pulled over, leans toward the driver; the worn-out shoes of a homeless person protrude from the cardboard box in which he sleeps.
A particularly seething photo shows a world in ruin: a flaming globe is held by a charred, bandaged hand that rests upon the financial page of a French newspaper. Next to a watercolor of the earth, moon, and Mercury surrounded by stars is a photo of a blindfolded naked man in a dilapidated room, wielding a heavy animal bone like a club. The collective reverberations of these powerful images and the five others set in motion a “free-floating sentence” that covers all grammatical bases: declarative, interrogative, exclamative, and imperative. Weight of the Earth, Part II, is among Wojnarowicz’s most vibrant late works.
David Wojnarowicz’s career as an artist and writer was tragically brief. He died from AIDS-related complications in 1992 at the age of 37. His remarkable body of work was most recently exhibited in the Whitney Museum of American Art’s retrospective, "History Keeps Me Awake at Night", which traveled to the Reina Sofia in Madrid and the Mudam in Luxembourg. Wojnarowicz’s arsenal of thought-pictures has shattered the citadels of the “pre-invented world” he despised and has made a profound impact on the lives and work of countless people throughout the globe.