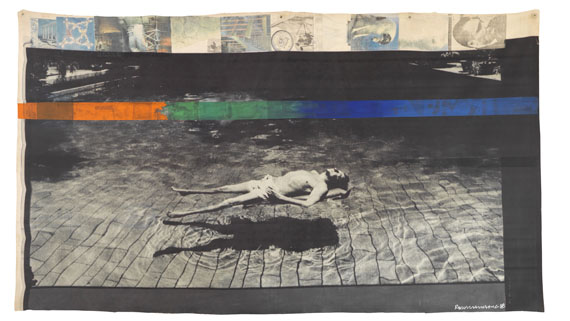 • In the 1960s, the magazine L'Espresso asked the photographer Gianfranco Gorgoni to make a feature about the American art scene.
• Leo Castelli helped him with the selection of artists the photographer would portray.
• Years later, Gianfranco Gorgoni invited the artists to work on their own portraits: Robert Rauschenberg, Keith Haring, Roy Lichtenstein and others took part in the project.
• Their works were then shown in the legendary exhibition "Altered Images“ at Penson Gallery in New York in 1988, our work from Robert Rauschenberg was among them.

The work is registered in the archive of the Robert Rauschenberg Foundation, New York with the number "RRF 88.189".

Gianfranco Gorgoni and his Artist Portraits

The Italian photographer Gianfranco Gorgoni, born in Rome in 1941, was commissioned by L'Espresso magazine to do a report on the American art scene in the 1960s. He lived in New York and came into contact with the local art scene through the gallery owner Leo Castelli, who also had Italian roots. Leo Castelli and his family came to New York during World War II. He initially set up a showroom in his living room and eventually became one of the most influential people in the art world in the 1960s. This contact was the reason why Gianfranco Gorgoni, both in context of his L'Espresso assignment and other projects, photographed numerous artists who today count among the biggest stars of the art world, among them Keith Haring, Andy Warhol, Roy Lichtenstein, Christo, Jean-Michel Basquiat, Richard Serra, Chuck Close, Robert Longo and many more. Robert Rauschenberg, who was represented by Leo Castelli since the late 1950s, was among those portrayed.

The Altered Images Exhibition in New York in 1988

About twenty years after Gianfranco Gorgoni was commissioned to make the feature about American art, the idea for an exhibition was born. The photographer invited the artists he had portrayed to create independent works of art from their photos. Many of them were enthusiastic about the idea, and the list of participants in the 1988 exhibition at Penson Gallery in New York reads like an encyclopedia entry on American and European art of the second half of the 20th century: Sandro Chia, Christo, Chuck Close, Keith Haring, Joseph Kosuth, Roy Lichtenstein, Robert Longo, Eliseo Mattiacci, Mario Merz, Mimmo Paladino, Robert Rauschenberg, David Salle, and Kenny Scharf. As basis for their new creation, each artist got an enlarged version of their portrait printed on canvas. The resulting works can be described as a rare form of self-portrait, in which the artist, starting from the perspective of the photographer, reflects the own person through stylistic elements characteristic of their artistic work, such as Keith Haring with his unmistakable drawings (fig.), Roy Lichtenstein with the striking brushstrokes and dots of Pop Art (fig.), or Christo in the style of his collages and drawings made to finance his big projects (fig.). The introductory text of the exhibition catalog says: "The exhibition had its genesis in Gianfranco Gorgoni's superb photographs of those contemporary European and American artists who have changed our visual perception of the world. […] The resulting multimedia works are not only 'altered images', but represent, as a whole, a literal survey of the richness and diversity of artistic invention in our time.” (The Penson Gallery (ed.), Gianfranco Gorgoni: Altered Images, New York, 1988, p. 4).

Robert Rauschenberg, Floating in a Pool Designed by Le Corbusier

Robert Rauschenberg's contribution to the exhibition at Penson Gallery is based on a photograph Gianfranco Gorgoni made of him in India in 1975. It shows the artist in a pool designed by Le Corbusier in Ahmedabad, where the famous French architect had conceived a villa for the Shodhan family in 1951. Robert Rauschenberg was in India in context of a workshop as part of his ROCI (Rauschenberg Overseas Culture Interchange) project and was accompanied by a larger group including the Italian photographer. Gianfranco Gorgoni captured the artist in a moment of calm, detached from his environment. Years later, Robert Rauschenberg reworked precisely this photo for the exhibition project with his very personal visual language. In the upper area he completed a collage-like series of pictures that is so typical of him and added a wide, colorful stripe in acrylic paint across the canvas. Rauschenberg decided to hang the canvas from the ceiling in the middle of the exhibition venue, so that motif and image carrier enter into a fascinating dialog. Moving with every draft of air, the canvas gently sets the portrait of the artist on the waves in the pool in motion. At the end of the process stands a work that can hardly be better described than with the closing statement from the Penson Gallery’s exhibition catalog: “With that which the artist has chosen to share with us, we come away […] with […] a new perception and understanding of these men and the nature of their work. It is ourselves, as well as the images, which have been altered.” (The Penson Gallery (ed.), Gianfranco Gorgoni: Altered Images, New York, 1988, p. 5). [AR]
More Information
+
Sell
Get a free appraisal for a similar object!
+
Register for
Robert Rauschenberg
+
Buying from A-Z
+
Contact a specialist
+
Robert Rauschenberg Biography
Share