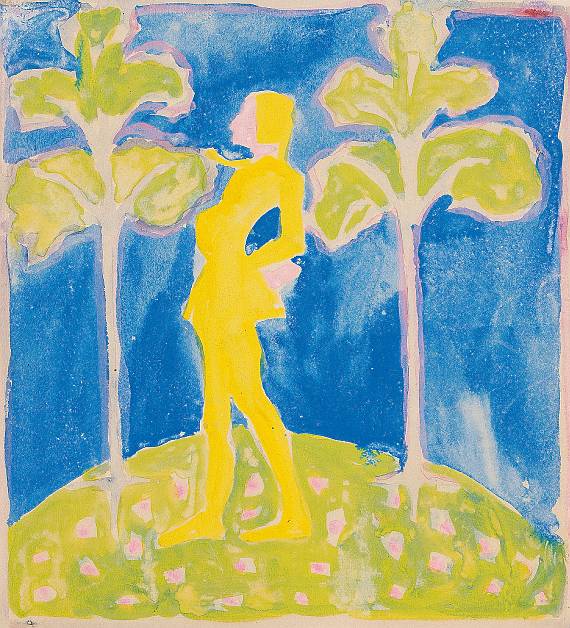 Being filled with enthusiasm about the painting of Böcklin, August Macke began his studies at the art college and the arts and crafts school in Düsseldorf at the age of 17. At that time, he designed scenery sets and costumes for the theatre. In 1907 Macke travelled to Paris, where he saw the paintings of the impressionists, which fascinated and influenced him. Back in Germany he went to Berlin and attended the painting school of Lovis Corinth for a short time. The work on hand was painted during the time of his studies in Berlin between October 1907 and March 1908, when Macke mainly repeated his drawings, partly in a more elaborate way and using a changed technique – with ink brush, colored pencils, watercolors or oil colors.
By spring 1906 Macke was working on the stage sets for Rotkäppchen [Red Ridinghood ]. Influenced by the new approach to stage scenery advanced by the Englishman Edward Gordon Craig, which Macke had studied in The Studio magazine, he also strove to reform stage scenery and lead it away from the usual illusionist approach. Inspired by a production of Shakespeare’s Twelfth Night , which Max Reinhardt put on at the Berlin Kammerspiele, Macke designed the present composition. Since it occurs twice in his sketchbooks, he must have been particularly drawn to the grotesque figure of Malvolio in the Shakespearean confusion comedy. From the formal angle, the composition of the watercolor consisting entirely of color surfaces is new and fresh, anticipating the later Tunisian watercolors, which are similarly built up. In Shakespeare Malvolio is the jester, whose comic character adopts an almost tragic streak. Macke has turned him into a complacently affected character by depicting him in angular forms with elongated limbs. The uniform yellow in which the figure has been laid out contributes a great deal to producing this effect. The artist has notably eschewed further detail, limiting himself to a few colors and concentrating entirely on the figure. Once again Macke reveals an assurance in dealing with a narrative theme that transcends the actual occasion.
In 1909 he got acquainted with Franz Marc in Tegernsee, in 1911 Macke joined 'Der Blaue Reiter', a group of artists from Munich. The trip to Tunis with Paul Klee and Louis René Moilliet in 1914 contributed to the development of his own style of bright, intensive coloration. On 26 September 1914 Macke fell at the western front in France at the age of just 27. [KD]