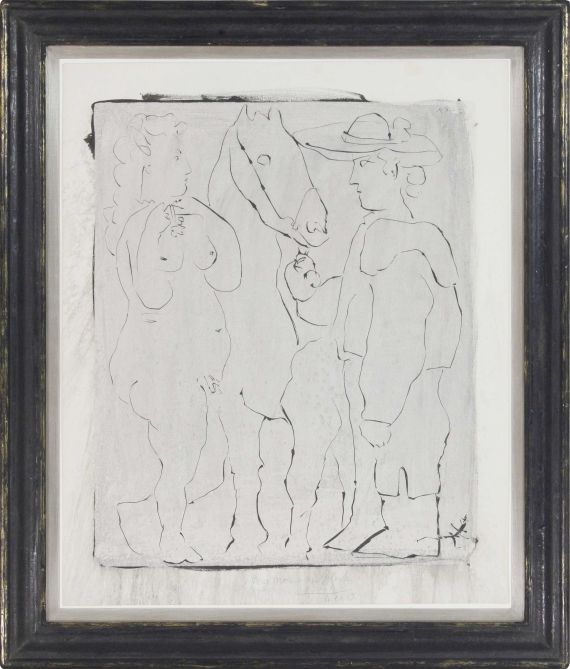 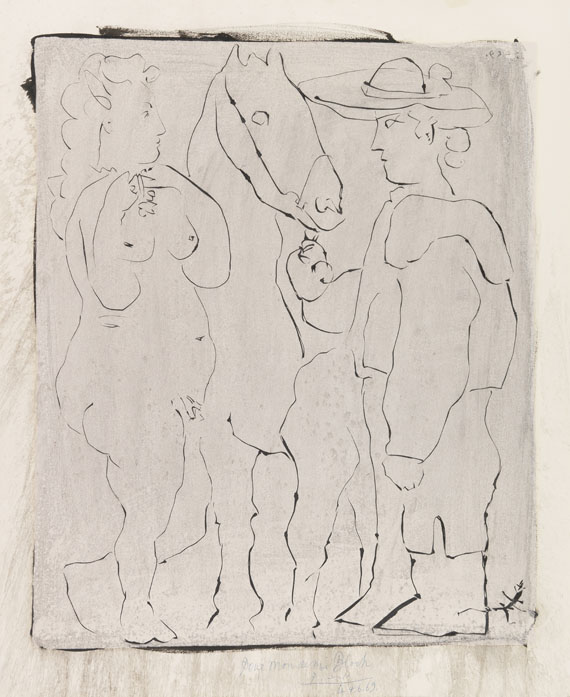 • From the collection of Georges Bloch, author of the catalog raisonné of Pablo Picasso's graphic works.
• One of presumably 5 Épreuves rincées.
• The special printing technique makes this work a unique object.
• Rare.

In the late 1950s Picaso discovered the linocut as a new technique for his artistic expression. Just as it was the case with all occasions when he entered uncharted lands, he explored the entire range of the new medium’s creative potential. With Picasso the rather rough technique that requires great manual skills turns out a lucky chance, as he is able to work out new and undiscovered possibilities, which mainly found realization in an entirely new formal conception. Picasso basically reinvented the linocut technique. With the help of the printer Arnera, Picasso developed a new method in 1963/64 that allowed him to get a seemingly positive impression of an old or a new linocut. What makes his linocuts so special is the fact that he draws with the gouge. Just as it is the case with his pencil drawings, he captures the motif in spontaneous and swift lines. A negative impression of the motif is the result of the printing process, which means that the incised lines are printed white while the rest appears in black. This leads to a rather dark overall result. Picasso, however, developed a new printing technique that allowed him to create a lighter print. The printing plate is brushed with white printer’s ink. By printing white on white an entirely white sheet comes out of the press. The white printer’s ink serves like an impregnation of the sheet. In a next step Picasso coats the motif with a thin layer of Chinese ink that is not water-soluble. The paper soaks up the Chinese ink in those spots where the white printer’s ink did not seal the paper’s surface. In a final step the paper is washed off in the shower. The white printer’s ink can be washed off in those spots where it is between the paper and the Chinese ink, this is how the typical splashes in the margin come into existence. As the ink wash is applied by handm and every motion differs in terms of swing and intensity , every print is a unique object. Owing to their process of creation, these prints from aside the edition are called "Épreuve rincée". Picasso once more delivers proof of his ingenuity that made him one of the most famous artists of all times. [SM]
More Information
+
Sell
Get a free appraisal for a similar object!
+
Register for
Pablo Picasso
+
Buying from A-Z
+
Contact a specialist
+
Pablo Picasso Biography
Share