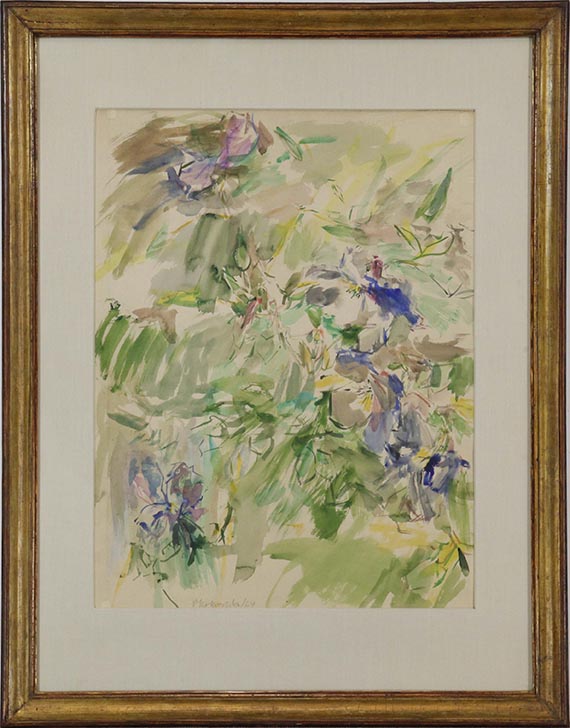 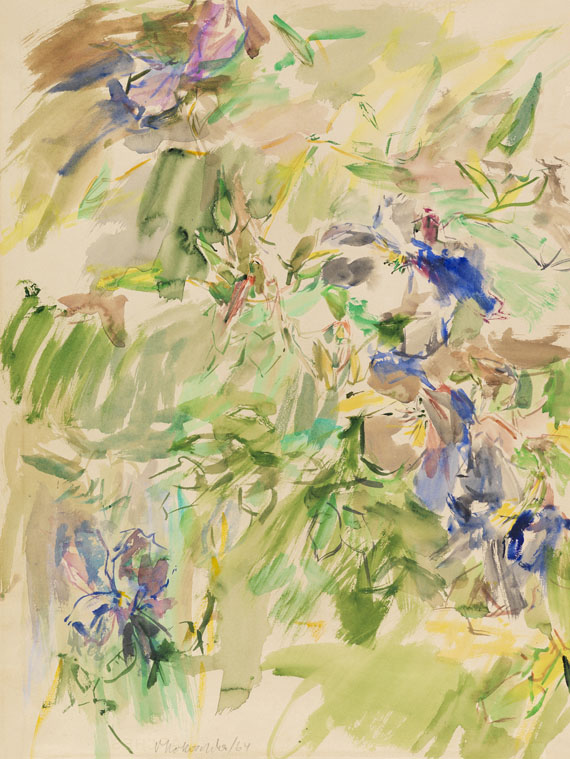 • Extremely rare full-sheet watercolor.
• Kokoschka renders the delicate watercolor on the paper without a preliminary drawing.
• Drawings and watercolors by the artist can be found in the world's most renowned museums and collections, among them the Metropolitan Museum, New York, Tate Gallery and the Victoria & Albert Museum, London, the Centre Pompidou, Paris, and the Bavarian State Painting Collection, Munich.
• His late creative period was extremely successful: in 1948 participation in the Venice Biennial, in 1955, 1959 and 1964 participation in documenta I, II and III as well as the grand retrospective exhibitions at the London Tate Gallery in 1962 and the Belvedere in Vienna in 1971.

We are grateful to Dr. Alfred Weidinger, Linz, for his kind expert advice. The work will be included into the forthcoming catalogue raisonné.

PROVENANCE: Private collection Northern Germany (presumably acquired in the 1960s).
Ever since family-owned.

Depictions of trees and flowers played an increasingly important role in Oskar Kokoschka's work, especially in later decades. As early as in 1925 he created a number of flower still lifes in oil, but his flower watercolors, which are so famous today, were not created until the 1940s after he had fled and emigrated to Great Britain. During the then difficult, challenging war years, the artist devoted himself to floral motifs with great pleasure. Their universal pictorial language allowed him to continue working as a painter in England: "I had to keep practicing my eyes and my hands, especially when, after the snow had melted, snowdrops, crocuses, hyacinths, daffodils and tulips bloomed in the first sunlight. Opened eyes, every day became an experience." (Oskar Kokoschka, quoted from: ex. cat. Kokoschka als Zeichner, Staatliche Kunstsammlungen, Dresden, 2011/2012, p. 180) In the early 1950s, Kokoschka and his wife Olda moved to Villeneuve on Lake Geneva. Their house, the "Villa Dolphin", was surrounded by a large garden that would serve the artist as a rich source of inspiration. The depiction of the fauna that surrounded him seems to have fascinated and interested him also because of a deeper environmental awareness. In the 1970s, for example, he sent an ‘environmental greeting’ to the canton of Vaud, stating “he had great hopes that the next generation will still have a chestnut tree in bloom instead of a new car park, instead of a skyscraper made of concrete" (ibid.)

In any case, Kokoschka's later floral watercolors are by no means lovely depictions of a well-known, everyday motif. Instead, the painter creates – as in the full-page watercolor from 1964 offered here – an open, relaxed, light composition from delicate and strong, pastel and rich color surfaces, in which he even partially crosses the border to abstraction. [CH]
More Information
+
Sell
Get a free appraisal for a similar object!
+
Register for
Oskar Kokoschka
+
Buying from A-Z
+
Contact a specialist
+
Oskar Kokoschka Biography
Share